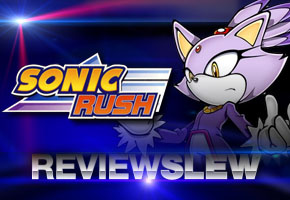 Sonic Rush is a solid game, as long as you can stomach the intense memorisation its levels require.

Since his re-launch in 1999, our blue blur has been on shaky ground. Will his next game be good? Will it be bad? With each new title in the series, it feels more like a roll of the dice than it does any concrete barometer for the quality of the series (although, at times, the dice seem to be loaded unfavorably). The only place you can turn to for a level of consistent quality with this franchise seems to be the 2D, side-scrolling games. Though nowhere as good as the original Genesis titles, the Sonic Advance games for the Gameboy Advance often represented the highest points for our blue blur in recent years. Of them, Sonic Advance 2 broke new ground by amping up the speed to untold levels, and including a new trick system that gave you short, mid-air bursts of speed in one of four directions. I myself consider Sonic Advance 2 to be the best of the three Sonic Advance games, and it pleases me a great deal to tell you that Sonic Rush, stylistically, operates as a kinda-sorta sequel to that game.

Storyline-wise, the game returns to Sonic’s familiar, if ever-changing world, where two new mysterious characters have shown up: Blaze the Cat, and Eggman-Nega. Eventually we learn that both of these characters come from an parallel dimension; Blaze the Cat represents her dimension’s version of Sonic the Hedgehog, as she lives her life trying to thwart the evil of Eggman-Nega. Blaze is cold and something of a loner, and as such, she eschews Sonic’s aide for most of the game, instead attempting to stop Eggman-Nega (and the dimensional rift he’s created) all on her own. Sonic, on the other hand, is Sonic – he runs around chasing both Eggman and Eggman-Nega, with the same carefree attitude we’ve come to know. Such is the life for a blue hedgehog.

In stark contrast to most Sonic games, Sonic Rush boils the typically massive list of playable characters down to just two: Sonic and Blaze. Both offer very similar play styles with minor differences here and there. For example, Blaze accelerates slower than Sonic, and her move set is much more suited to vertical gameplay, with high trick jumps and the ability to hover for a limited amount of time. Unfortunately, most levels aren’t really built to take advantage of this very well – most players will have a hard time understanding the differences between Blaze the Cat and Sonic the Hedgehog because the majority of the levels in the game seem never really seem to emphasize one character’s abilities over the other’s. There are a few areas Blaze can reach more easily than Sonic, but the key phrase here is “more easily”. Generally speaking, anywhere that Blaze can go, Sonic can probably go too, with enough effort.

The first and most noticeable addition to Sonic Rush over the Sonic Advance games is the Tension Gauge. As long as the tension gauge is filled, players can execute a dash maneuver that not only provides a massive speed boost, but makes them invincible to most enemies and hazards, as well. The second most noticeable addition is the expanded trick system: rather than one-time-use mid-air bursts like Sonic Advance 2, it’s now entirely possible (and even encouraged) to pull off long strings of tricks for the entire duration of your airtime, with special “finisher” tricks and “dash” tricks thrown in to mix things up and provide some strategical options. Besides looking cool, the biggest benefit of doing tricks is that they fill your tension gauge. If you fill your tension gauge to maximum, you are granted infinite tension for a limited amount of time. This time limit can be extended by continuing to combo actions that fill your tension gauge – destroying enemies, pulling off tricks, finding items, etc. As a result, the game falls in to a rather satisfying rhythm of “dash, launch in to the air, execute a string of tricks, land, and resume dashing” that never gets old.
Unfortunately, the game feels a little too comfortable in this rhythm; there are a number of times where you are required to stop or slow down in order to do a short platforming segment and, because the game is so heavily focused on dashing, you run right past it, unaware. Even worse, you’ll most likely plummet off a cliff to your doom. There’s very little indication when these sections turn up, and it’s so easy to go so fast, you’re going to be missing these sections a lot. Adding insult to injury, when running and tricking, the game is fast and smooth, but once you slow down and start hopping across tiny platforms, the controls feel stiff and kind of unwieldy. It feels like they weren’t they weren’t really designed for this sort of thing, and getting used to moments like this can be tough; especially because these moments usually come very abruptly because for most of the game you will spend your time blitzing along at top speed.

This is, in fact, a problem not localized to just Sonic Rush, but to the Sonic Advance series, too. The entire series has a bad habit of making poor level design decisions; notoriously the act of placing dangerous obstacles directly in the player’s path. Most players on their first attempt at a level are unaware that these obstacles are there and most likely run in to every single one of them, leading to many, many unfair deaths. It’s trial-and-error of the worst kind, forcing you to memorize every last inch of the level in order to consistently do well. Obviously, the addition of the Tension Gauge and the related dash maneuver were designed to help alleviate this problem, but the game still leans way too heavily on memorization. What this boils down to is that your first time through the game can be rough. Frustrating, even. Levels like Altitude Limit will make you weep on your first time through due to just how unforgiving they can be to newbies. But as they say, practice makes perfect. It sounds weird, but the game doesn’t really start being fun until after you’ve beaten it; every subsequent time you replay a level you’ve already seen, it becomes easier to handle and more fun to play.  The better you memorize the levels and explore them, the higher your scores get and the faster your times become, all reaching towards the ultimate goal of achieving the S Rank on every level and boss in the game (which unfortunately doesn’t really do anything outside of boosting your own self-esteem).

However, speaking personally, the game never got so frustrating as to make me stop playing; just be ready to die and restart from a checkpoint at a moment’s notice and don’t be surprised if you actually see the game over screen a few times. If you’re the type to replay games you’ve already beaten multiple times, you owe it to yourself to muscle through Sonic Rush’s memorization requirements, as the game only becomes increasingly more endearing the more you play it. However, if you are the type that is easily frustrated, it’s probably a good idea to stay away from Sonic Rush – in its place, I would wholly recommend you check out the sequel, Sonic Rush Adventure.