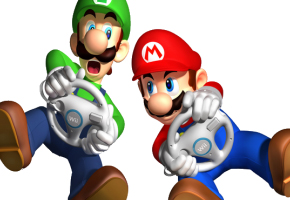 Is the Wii Wheel the Only Way?

For some Nintendo Faithful more traditional controls have fit well. When the Wii came along, its remote brought in a whole new generation of casual gamers, but left a few scratching their heads. In major titles such as Super Smash Brothers Brawl, this issue is rectified by allowing the use of both the classic controller and old GameCube controllers, with a complete map of moves for each, all customizable.

It won’t be that simple for the equally anticipated Mario Kart Wii.

Nintendo’s press release touting the April 27th release of the game spells out that, unless you’re using the provided Wii Wheel, you’re not getting full control. Gamers will still have all their options of controls, but two–the Classic and the GameCube–have some drawbacks. According to the release:

If the changes didn’t foster a potential for competitive advantage per what controls you use, this might be forgivable. But that’s also not as clear. Earlier in the release, under the Special Powers area, the release explains:

Players can shake the Wii Remote while launching off a ramp to pull off a trick that will temporarily boost their speed. When riding a bike, players can gain additional speed by flicking the Wii Remote up and popping a wheelie.

So, if you’re not using the Wii Remote or the Wii Wheel…you may have problems achieving that extra sense of speed, and perhaps other tricks needed to win.  In competition, where mere seconds in a race can be the difference between first and last place, these changes are critical.  We’ll have to see how these alterations pan out with Mario Kart faithful.