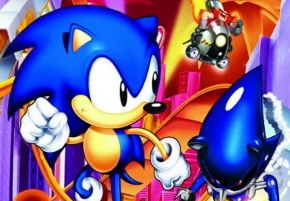 Archie comics has recently released their preview and scans from the upcoming Sonic The Hedgehog Archives #7, scheduled for release in June.

SONIC THE HEDGEHOG ARCHIVES #7
The thrilling new series that lets fans relive classic Sonic stories continues! Volume 7 presents issues #25 through #28 of Sonic’s ongoing comic book series in a special 5 x 7 & ½ inch edition. Each story is meticulously restored and printed on high-grade paper-so you can feel like you’re zipping right alongside the cobalt champion as he saves Knothole Village! This action-packed edition features the first comic book appearances of Metal Sonic, Amy Rose, Sonic’s betrayal of the Freedom Fighters and the solo story that led to Tails’ own mini-series! Stories include:

“Go Ahead, Mecha My Day” (issue #25): Robotnik
kidnaps Amy Rose so he can lure Sonic into a duel with his newest
creation, Metal Sonic! First appearance of both Amy and Metal!

“Way, Way, Way Past Cool!” (issue #26): Robotnik attempts to put Knothole into a deep freeze, but luckily the Arctic Freedom Fighters arrive to thaw… and thwart… his chilling scheme!

“Fortified” (issue #26): A twisted ankle for the blue blur leads Sonic and the Freedom Fighters to refuge in an abandoned fort. Will it be enough to protect them from Robotnik’s rampaging onslaught?

“Scrambled Hedgehog” (issue #27): A case of amnesia makes Sonic an easy mark for Robotnik, who convinces our hero to almost give away Knothole’s secret location! Will Sonic’s memory return, or will his betrayal be permanent?

“Saturday Night’s All Right for a Fight” (issue #28): Sonic continues his traitorous ways due to his memory loss, and the Freedom Fighters need all the firepower they can muster to defeat their once-great champion!

“Growing Pains Part 1” (issue #28): In the aftermath of Sonic’s betrayal, Tails sets course in his Sea Fox for an uncharted island. There he meets and must save Fiona Fox, who the dastardly Robonik
kidnapped, in this prelude to Tails’ mini-series.