Sonic at the Olympic Games Mobile Site Up 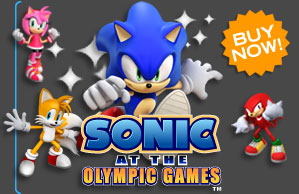 Sorry folks, Mario will not be joining the fun at the Olympic Games this time as Sonic and friends go at it without the mustached-plumber. After a recent announcement of new Sega Mobile games for your cell phone, Sonic and the Olympic Games is ready for download as Sega has just opened their website for the game.

The website includes 6 new screens and a video clip of in-game footage that is so small you won’t be able to see exactly what is going on. Sonic at the Olympic Games will include Sonic, Tails, Knuckles and Amy as playable characters through five events, which will include the 1500m, 400m Hurdles, Triple Jump, Discus and Javelin. Check below for the official description of the game:

Sonic, Tails, Knuckles and Amy go for the gold! Master five events including the 1500m, 400m Hurdles, Triple Jump, Discus and Javelin and earn your place on the podium. Especially designed for mobile phones, Sonic at the Olympic Games™ features easy one-button controls, automatic saves and progressive gameplay that increases in difficulty as you advance through the Qualifying round, the Heats and Semi Finals and ultimately, the Finals. The better your scores, the faster you will rise up the high-score boards as you make history with Sonic at the Olympic Games!

Tracklist for Senoue’s “The Works” Revealed