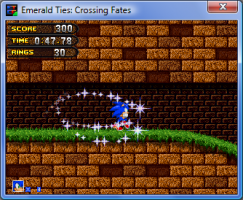 Could a Full Release be Far Behind?

The title, with its colorful original graphics and physics engine, the team is working on a 360-degree movement engine, as well as the inclusion of some classic 2D Sonic power-ups, parallax scrolling, and Super Sonic will be seen in the final product.

Most of the above is demonstrated in the demo, which is available at their SAGE booth.  We have a short screenshot gallery below, and Emerald Ties: Crossing Fates reviewed shortly.