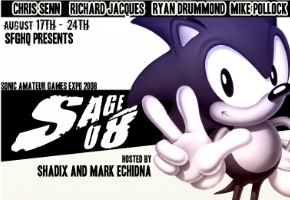 The Best Game at SAGE may not be a Sonic game

There’s been nearly critical acclaim all around going to one particular title at SAGE…and it’s not a Sonic fan game.

Instead, Everlasting Song by Blue Frenzy, an action game described in the vein of Metroid or Castlevania, is getting a lot of attention.  It’s no wonder either–the Multimedia Fusion 2 developed title is in its first beta release and is already boasting a ton of features:

Extra missions and quest available in the inn. NOT AVAILABLE ON THIS DEMO.

Challenging. This is not an easy game.

This first demo contains one dungeon and one field area.  If you’re stuck, there’s a suite of tutorials available, and there’s a walkthrough you can read right on Blue Frenzy’s SAGE booth.  The buzz right now is that this, along with Nothing, may be ones to watch potentially transcend into professional, original works.

First @ TSSZ: ProSonic Engine Beta to Be Released During SAGE