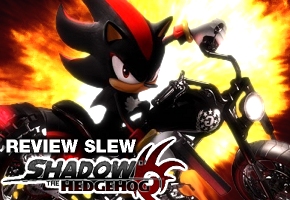 For a long time now, I’ve been curious to try Shadow the Hedgehog. I’ve heard tales about how truly awful the game really was, but I wanted to try the game for myself. Over the next several years I had several opportunities to purchase the game, but for a game with such a legacy for being awful, most of the prices listed for the title were more than I was willing to pay. When, finally, I was offered the chance to get the Playstation 2 version for free, I no longer had an excuse to avoid owning the game.

The game’s first impression was not a good one. Playstation 2 ports of Sonic games are generally to be avoided; the PS2’s lack of power and SonicTeam’s unhappiness with the console translates to embarrassing framerates. On the Gamecube and Xbox, Shadow the Hedgehog runs at a silky-smooth 60 frames-per-second (fps). On the Playstation 2, the game usually runs at 30fps with more than a few instances where it dips down even lower, in to the 15fps (and below) territory, sometimes getting so low the game suffers massive, crippling amounts of slowdown. This is made even more frustrating in the face of the game’s muddy, murky textures and really poor animation, which end up making the game look even worse than Sonic Adventure 2 on the Dreamcast, a game produced for weaker hardware over four years prior.

To say “the controls take some getting used to” is being more generous than the game deserves. To put it simply, Shadow steers like a super-charged tank. His forward acceleration brings him up to full speed almost instantly and he can stop on a dime – but trying to make him turn left or right is next to impossible, as the faster Shadow is moving, the more sluggish his steering becomes. Even in levels that provide wide-angle turns, Shadow frequently ends up hugging the walls. The poor controls don’t stop there – I have died more times in Shadow the Hedgehog due to mis-fired homing attacks than I have any Sonic game to come before it. Sometimes, Shadow will be well within range of an object and the homing attack will simply refuse to lock on at all. Other times, Shadow will lock on to an object that does not even exist, usually sending me over the edge a platform down in to the deadly, never-ending abyss below. There’s no rhyme or reason why these things happen, they just do. 90% of the deaths I’ve had in this game so far have not been my fault. The controversial guns actually end up being sort of a worthy addition to the franchise – though the sight of a cartoon hedgehog wielding an MP5 is surreal and unfitting of the franchise, most guns handle fairly well, and are a requirement to finish the game in a timely fashion, seeing as some enemies have been given massive life bars and the finicky homing attack will more often than not get you killed. The only guns that are a pain to use are the ones that lack a lock-on feature; despite the huge crosshairs, aiming a rocket launcher is next to impossible.

So that’s it, then, right? A horrible framerate, ugly graphics and some of the worst controls in franchise history. Case closed, game over, it’s trash? Yes and No. Shadow the Hedgehog, unfortunately, contains a number of good ideas that are typically marred by really poor execution. The first and foremost being the idea of there being one playable character. As the 3D Sonic games have gone on, a theme has begun to pervade: character classes. With each 3D Sonic game dealing with a cast of six or more playable characters, generally the game divides these characters in to different class-based gametypes. The terminology was first used in Sonic Adventure 2, where Sonic was described as a “Racing” character, Eggman was a  “Shooting” character, Knuckles was a “Hunting” character, so on and so forth. Sonic Heroes solidifed the concept of there being “Speed”, “Power” and “Flight” characters, a concept that carried over in to Sonic Riders. What this essentially means is that because each character focuses on a very limited, very specific skill, that’s all you ever encounter with that character. As Sonic, all you do is race around at high speed. As Tails, his flight ability makes for an ideal environment to do lots of platforming. There’s very little variety to be had, as the variety you get is from the diversity of gametypes. This is in opposite to the classic Sonic games, where you were provided a balanced mix of speed, platforming, and exploration no matter who you played as.

Surprisingly, Shadow the Hedgehog returns to the formula of classic Sonic games; without a bunch of different character classes to fill in the blanks, Shadow himself has to do a little bit of everything. There are levels that are heavy on speed, heavy on platforming, heavy on combat, heavy on exploration, heavy on puzzles, and others that provide a balance of everything. The addition of branching storyline pathways (each with their own unique levels) provides even more mission variety, as you can either choose to run through the level as quickly as possible to get the “Neutral” path, or you can complete specific objectives for both “Good” and “Evil” pathways. Enemy variety, something I’ve really missed in 3D Sonic games, also gets a fairly dramatic spike thanks to three factions of enemies coming from the three different sides of the game: Eggman’s Robots, the Black Arms Aliens, and the Military. Each side has at least five different types of enemies, and though each side generally gets the same “classes” of enemies (Infantry, Shielded Infantry, Flying enemies, Giant War Machines, etc.), they all have unique twists in the form of their different weaponry: be it lasers, missle launchers, gatling guns, spears or energy swords. It makes the enemy selection feel more diverse than most Sonic games of this type.

It should, however, come as no surprise that while these sound good on paper, when they’re put in to use, the severe lack of polish the game suffers from ultimately ruins them. Sure, the levels are nice and big with tons to do in them – but mission variety is usually extremely tedious. Picking Good or Evil generally asks you to complete some arbitrary task (such as defeating 30-40 enemies of a specific type), and without a radar to tell you where you’ve missed one, you can spend upwards of an hour in a single level looking for that last alien you haven’t killed. Neutral is always presented as the path of least resistance – there even being a level where you can pretty much skip playing it entirely if you simply choose to take the neutral path. And though there are three factions of enemies, it doesn’t matter who you end up aligning yourself with (good, evil or neutral), as all enemies will always attack you. It’s frustratingly ironic to be attacked by the guys you’ve supposedly allied with and get verbally repremanded for attacking them in return. The branching storyline is its own kettle of fish; though the idea of being able to choose “Good” or “Evil” is great, in practice, it makes the storyline almost total nonsense at times. Essentially, the vast majority of the plot in this game means absolutely nothing as most storyline events involve Shadow wondering about the next Chaos Emerald, encountering an mission that will provide him with a Chaos Emerald, completing it and then moving on. Though there are a couple of “revelations” to be had, they are spaced so far out between the various Good/Neutral/Evil storyline branches that encountering one is a rare occurence, and in the end, none of that really matters as it usually results in Shadow simply saying “This is WHO I AM” regardless of what pathway you chose. Completing all possible storyline pathways will eventually open up the typical “Final Story”, which provides the one true ending to the game, but I will be honest in saying that I don’t have the stomach to make it that far. Getting to that point requires you to replay the entire game at least five different times (or more, if you’re like me and went through the game messily choosing various good/evil missions on a whim), making sure you pick the correct storyline branches along the way.

What this all boils down to is something I find myself saying an increasing amount regarding the Sonic franchise: This game needed more time in development. Certain elements of Shadow the Hedgehog were a lot better than I expected, but at the same time, other elements were also a lot worse. With an adequate layer of polish to the controls, the level design, and the mission objectives, Shadow the Hedgehog may have actually been a good game. However, like the difference between a smooth clay pot and a lumpy ash tray, Shadow the Hedgehog collapses in on itself – making it an ugly, poorly crafted mess.