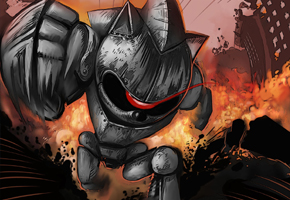 Brazilian Metal band release their Sonic tribute album on the net for free!

Musical tributes to Sonic The Hedgehog games aren’t rare these days. Be it piano players on YouTube reeling off a number of classic stage themes or fan music projects like Hedgehog Heaven and Project Chaos dragging the 16 bit music from the games kicking and screaming into the 21st century. The musical talent of some Sonic fans has never been in question.

Queue Brazilian metal band MegaDriver throwing down the gauntlet and releasing the heaviest Sonic tribute album of all time. Full credit goes to T-Bird from Sonic Stadium for pointing me in it’s direction.

Released free to download on the bands shiny new website, MetalHog is a Sonic tribute album like no other. Rooted mostly towards the early Sonic games the album doesn’t tread on Project Chaos’ fingers too much featuring covers of songs from Sonic 1’s Green Hill, Marble and Scrap Brain Zone all the way to Sonic 2’s Chemical Plant, Casino Night Zone and Sonic 3 & Knuckles’ Ice cap and Flying Battery Zone. The newest and it has to be said probably the weakest song on the album is a cover of Live and Learn from Sonic Adventure 2.

Easily one of the better songs though is albums title song MetalHog (Vs Robotnik) which combines both Sonic 1 and 2’s final boss music for some seriously satisfying metal action. It’s true what they say, the bad guys get the best music.

You can download the album for free at the MegaDriver website but be sure to check out the bands other tribute albums for covers of Streets or Rage, Golden Axe, Altered Beast and more.

Paul Rudd Out of the Running for Sonic Movie Lead