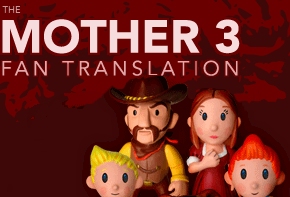 Sequel to EarthBound is now in English

It’s hard to keep a good Earthbound fan down. In the face of Nintendo of America’s total refusal to localize the game, the Earthbound community has taken it upon themselves to translate Mother 3. After two years of work, the translation is finally complete. Quoting the website,

Mother 3 is the sequel to EarthBound (an epic Super Nintendo RPG released in 1995) which was in development for 12 years before it was released in Japan in April 2006.

It soon became clear that Nintendo of America was uninterested in localizing the game, so in November 2006 the fans took matters into their own hands with the Do it Yourself Devotion project.

For two years a team of translators and hackers worked to produce an in-depth, professional translation and localization of MOTHER 3. In August 2007 the team began blogging about their progress, attracting the attention of the gaming industry, media, and more than half a million unique visitors.

After more than 13 years of waiting, the sequel to EarthBound is now in English! I hope fans of the series, new and old, will find MOTHER 3 to be just as unique and interesting as its predecessors. We tried our very best to make a worthy translation, and I think we came close to hitting that mark. With any luck, the translation will seem just as “strange, funny, and heartrending” as the original Japanese version.

MOTHER 3 is filled with secrets and rarities. Characters say new things after even the tiniest of events. Take your time to explore the game’s intriguing world – you won’t be disappointed! And when you’re done, be sure to come back here, because we’ve prepared many more goodies for fans to check out and enjoy post-game!

Enjoy your time in the world of MOTHER 3!

The website offers instructions on how to apply the translation patch, as well as other translated goodies, like a detailed interview with Mother 3 producer Shigisato Itoi, a walkthrough for the game, a trailer for the patch, and links to official Mother 3 merchandise.

The original Mother started as an NES game reminiscent of Dragon Quest set in modern day with a quirky sense of humor. It was almost released in America as Earthbound Zero, but Nintendo of America held back the game for fear it would have poor sales due to the popularity of the recently-released Super NES. The SNES sequel, Mother 2, was officially released in the USA as Earthbound, containing the same modern-day setting and weird humor. It came packaged with a strategy guide for the game, which contained scratch-and-sniff stickers that proudly declared, “This game stinks.” Domestic sales for the title were not very good, and many Earthbound fans blame a combination of the poor marketing slogan, increased price due to the packed-in strategy guide, and a visual style that made the game seem simplistic next to other RPGs at the time, like Chrono Trigger and Final Fantasy III. Though a commercial failure, the game gained a cult following, leading to the formation of StarMen.net.

Mother 3 was initially announced for the Nintendo 64 expansion-peripheral, the 64DD. When the 64DD failed to launch in Japan, the project was shifted to the standard Nintendo 64, and was eventually canceled in 2001. Upon cancellation, StarMen.net began petitioning Nintendo to let the game see release. Years later, Japanese Game Development Studio “Brownie Brown” announced they would be producing Mother 1&2 for the Gameboy Advance. Simultaneously, they also announced that “Mother 3 is Coming Soon”. Immediately, StarMen.net began trying everything to let Nintendo of America know that Earthbound fans were worth caring about, in an effort not only to get Mother 1&2 in America, but to get the upcoming Mother 3, as well.

After a petition containing 30,000 signatures, flooding Nintendo’s tech support line, and crafting a hard-bound “Earthbound Anthology” book full of artwork, music, and stories from Earthbound/Mother fans world-wide, Nintendo of America remained cold and distant on the subject of Mother 3. It is rumored that at one point Atlus, famous for their localizations of Disgaia, Shin Megami Tensei, and Persona 3, expressed interest in translating and releasing the Mother games and Nintendo explicitly refused, stating if anybody was going to translate it, it would be Nintendo of America, personally.

All options exhausted, StarMen.net eventually decided that the only way they would ever see Mother 3 in english would be to translate the game themselves. According to the game’s official producer, Shigisato Itoi, Mother 3 is the last of the Mother games. It is unclear what Itoi will be working on next.

Mario & Sonic at the Winter Olympics Sochi 2014 website is open