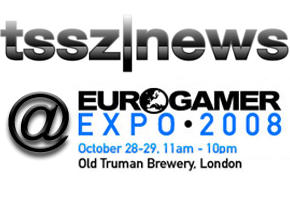 Good games, bad games and did Sonic make an appearance?

Yesterday TSSZ News sent their only UK based reporter (thats me!) down to London to attend the Eurogamer Expo. The journey was three long hours and the drive home again was treacherous. Battling against heavy snow in pitch black darkness is not a fun time to be had. But it was all worth it to gather information for you TSSZ News readers around the world unable to attend the event.

The Expo itself was held a good 10 minute walk away from Aldgate East tube station down Brick Lane, which is defiantly the most aptly named street in the world being basically a lane with a brick road (Unless theres a street somewhere called murderers alley or something where… well you get the point). I would have taken some pictures but I was very aware that Brick Lane is one of those streets that you don’t really want to be walking down, late at night, on your own.

Inside the ‘Old Truman Brewery’ itself and the Eurogamer Expo was the stuff of gamers dreams. Literally hundreds of demo pods lined the hall showcasing a variety of either recently released or soon to be released games. Even the DS and the PSP had a good showing with a corner of the show floor to themselves. The rest of the substantially sized room was given to the PS3 and 360 with all their games displayed on HDTV’s, some games being afforded massive 40 inch screens.

Out of all the games played I’ve selected a handful to write about in detail. So in the coming days expect to read impressions of Street Fighter IV, Super Street Fighter II Turbo HD Remix, Prince of Persia, Mirrors Edge, Tomb Raider Underworld, Smackdown vs Raw 2009 and LittleBigPlanet.

Keep your eyes peeled and your wits about you as impressions could be posted at any time.