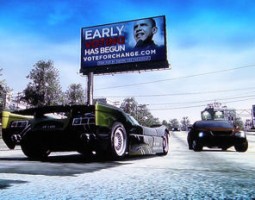 Gamespot has revealed that the campaign for Barak Obama spent over $44,000 for a month long campaign of in-game advertising on various XBOX 360 titles.

When we brought you the story earlier this month, we told you that campaign almost completely spanned EA titles, such as Need for Speed: Carbon, and Burnout Paradise.  That money was paid to Massive Advertising, which is a subsidiary of Microsoft.  The ads only ran in what the campaign considered battleground states.

$44,000 sounds like a lot of money, but consider that Barack Obama spent over $3 million to play a half-hour political ad on three of the four major US broadcast networks last night.  Also consider that Obama’s campaign war chest is well in excess of $100 million.  These funds are largely donation driven.

For the record, Massive did approach the McCain campaign about a similar ad buy, and they refused.

Online Network Behind Sonic for Hire Series Hit with Layoffs