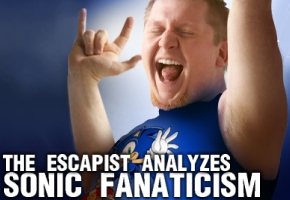 One could say that it takes a certain kind of person to remain loyal to a character like Sonic the Hedgehog for the roughly 17 years since his 1991 debut. Regardless of what you have to say about the character or its fans, there are perhaps some out there who are a little too obsessed with the character; thinking about Sonic in ways most people don’t consider. The Escapist has posted an article about these people entitled “Fast Track to Fanaticism“, shedding some light on the more fringe elements of the Sonic Community and how some of it is beginning to leak in to the franchise itself:

“Remember the charming, fast-paced platformer that engaged so many back in 1991? The current crop of the franchise is a long, long way from those days. Not just in terms of modern presentation and complexity, but in the ludicrous plots which pander to fan-fiction authors by serving up further helpings of ridiculous material about Chaos Emeralds. The latest Sonic game is an RPG-based affair, sub-titled The Dark Brotherhood, for heaven’s sake. In a couple more years Tails’ collection of My Chemical Romance albums and Shadow’s problems with self-harm will probably be canon.

Similarly, each release seems to introduce even more characters, who either express painfully outdated ’90s ‘tude or embody nightmarish, huge-eyed infantilism – again, pleasing both fan-author and fan-artist alike. Judging by some of the seedier online Sonic haunts, some fans now find it difficult to ascertain whether Cream the Rabbit is a character name or an imperative from the developers.”

It’s a good read, as most articles from The Escapist tend to be, as long as you can stand to look your own fandom in the mirror.