The Tangent: Is Average Enough? 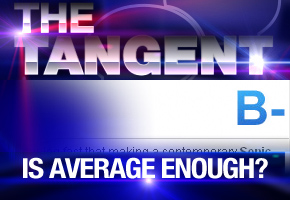 On the eve of Unleashed, there may be no middle ground.

Let’s be truthful. On a news site so focused on the Sonic series, it’s difficult to avoid writing about the next major Sonic title on the verge of release, even though it was the focus of the very first Tangent. This time, instead of a focus on a specific feature of the product, there’s an overall question to ask: Is average enough?

There is a lot riding on this new Sonic. Even if you’ve found enjoyment in the more recent 3D titles, a feat shockingly possible, popular opinion has been that the games have missed the point of what fans want, and the ideas they implement are too often buggy and unpolished. Instead of perfecting one team of three’s mechanics, they spread their efforts over four different teams. Instead of a focus on good platforming gameplay, or good weapons-based combat, or good physics-based puzzles, they throw them all in at once and don’t dedicate enough time to any of them. Shadow The Hedgehog‘s levels vary in concept and structure so wildly, you wouldn’t be alone to wonder if they were lifted from another project. Even if the ideas themselves aren’t terrible, it’s been the execution that too many people find problems with.

All eyes are now looking to Sonic Unleashed. Gloating far too much in the leading days to the 2006 Sonic the Hedgehog, Sega has learned their lessons about claims of Sonic going “back to his roots”. Mostly. They’ve been far more humbled in their promotion, and beating it into people’s heads that it will not fit the mold of prior Sonic games, conveniently forgetting Secret Rings of course. They’re fighting a war against people’s expectations, and want to disarm them with something new. 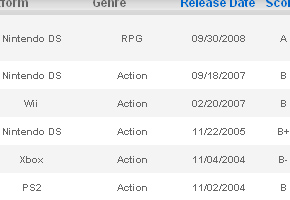 Expectations play a key part in the success or failure of all things. Or perhaps you could say that it’s the fulfilling or failing those expectations. That sounds obvious, but think about what it means in the gaming market, and to a series with a 17 year, varied history. This is a game not only trying to appeal to new customers, but to a collected audience of approaching 2 decades, each having different experiences and opinions of what would make a good Sonic title. Some of these people have been there since the first note of Green Hill Zone. Others weren’t as interested until the more color-saturated Sonic 2, with the addition of the first “s_____ friend” and the physics-breaking Spin Dash. Others may have taken their first strides through Emerald Coast, or found their entertainment in a dark Sonic duplicate. Maybe the first riffs of “Team Chaotix” made them want those detectives on their side. Even with the perceptions of the 2006 Sonic, which once again proves why you should never title a later game after the main character or first installment and particularly not both, some gamers came to associate their fondness of the series with a green-glowing psychic that can beat you down provided someone’s carelessly left boxes around. These people all see different values in the Sonic games released so far, and some have strongly-conflicting concepts of how to make the next title good.

So Sega’s thrown their chips in, opting to take a sharp turn from titles prior and trying to disarm people’s expectations. To some degree they’ve succeeded, and the sentiment of many is that they’re willing to give this game a fresh chance. How true they are to their word remains to be seen, but it’s very likely that this is a significant decision point for the series. It may regain many of the avid Sega nerds it lost before, or it may push them, and others, further away for years to come. As they say, after all: Fool me once, shame on you. Fool me- you can’t get fooled again.

Now on the eve of Sonic Unleashed’s American release, this is the strange situation that Sega is facing: Have people been hyped into believing this will be a brilliant, perfect return to all things classic and new, or are people’s expectations of the latest Sonic so low that even a modest showing will be seen as a success? To use another political parallel, think back to the American Vice-Presidential debate a month prior. I know you may have walled off that part of your mind, but dig a hole into the mortar, there’s a point to be made. Going into that intellectual and social sparring match, it is not unfair to say that expectations of the Republican vice-presidential candidate were so low, that simply by not failing miserably, her performance was seen as a success. Her opponent may have pulled most of his punches out of concern of being labeled a bully or misogynist, but that didn’t matter. This was lampooned by many cartoonists and comedians, but the result was confidence in the Republican brand, even if only temporarily. 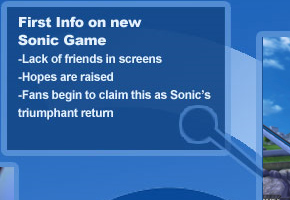 There are people waiting for this game to fail. There are some people that will be convinced it’s failed no matter what the final product, but there are others who expect this game to fall flat on its face. Its strange, half-mutated face. If this game doesn’t make any major mistakes, if the gameplay is even and not that glitchy, if the voice work is listenable without cringing, if the music fits the scenes well enough, if the graphics are tightened up on level 3, even if the result is an average, unremarkable, but certainly playable game, could that in itself be remarkable for some?

Now how about the other end of the spectrum? Those that are convinced this title is something different, something that defies the infamous Sonic Cycle. Let’s say Sonic Unleashed turns out to be just a good game. Not fantastic, not unbelievably well-crafted, not wholly unique, but a solid B-. To those people, has Sonic Unleashed failed miserably? In their eyes, in generating a decent title, they’ve failed to create an Editor’s Choice, so is the series somehow worse for it? Their standards may not be that brazenly extreme, but the requirement of a stroke of genius before the game can be considered good may be a bar so high that not even stretchy werehog arms can reach.

That is the situation that faces us as the spiny fellow races to store shelves. I don’t have an answer, only a question, and maybe a little cause for self-reflection. In this time where games are either considered triple-A titles or absolute failures, is there room for such a highly-anticipated game to just be… decent?

Sonic Boom to receive design tweaks based on feedback