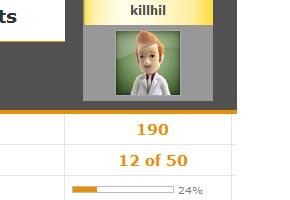 Hilary Goldstein–male, not female–is not a popular figure in the Sonic community right now.  His 4.5 out of 10 score for the XBOX360 edition of Sonic Unleashed on IGN, one of the top gaming sites in the world, has caused quite a stir.

Now, evidence has surfaced that claims Mr. Goldstein may not have completed the base game for his review.  In fact…he may not have even completed half the game.

TSSZ News has obtained images that are circulating on the Sega and GameFAQs message boards.  The image is alleged to be the XBOX profile of Mr. Goldstein–with the nickname “killhil.”

The statistics he has for Sonic Unleashed, if true, are quite eyeopening–only a 190 gamerscore with only 12 out of 50 achievements unlocked, only 24% of the game’s goals reached.

It gets better.  The image shows his latest major achievement as it pertains to the game’s progress was “Picking up the Pieces”–completing the fourth continent.  The image shows Goldstein’s latest achievement being the level-up on his Lightspeed Dash on Monday.  Another image suggests, as of Monday, he has not restored the fifth or sixth continent, and has not compelted the game.

Right now there is no information to suggest this is false, though we are still working to verify the authenticity of the imagery.  In light of this coming out, there have been several calls for Mr. Goldstein to be fired, or at least review the game once more upon its completion.  A petition has even been established for the latter effort, though with very little signatures to show for it at the moment.

We want to know your thoughts on this drastic turn of events in the row involving Unleashed’s poor showing in the mainstreaming gaming media.  Let us know in the comments section below.