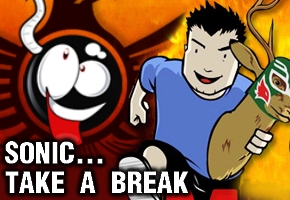 In similar theme to Yahoo declaring that “Sonic needs to die”, GiantBomb.com has posted the results for their “Golden Anniversary Year-End Awards Extravaganza Spectacular”, awarding Sonic the Hedgehog the “Take a Break” award. To quote the site:

“Gaming is a sequel-driven business, we’ll admit, and we’re perfectly happy to keep playing new installments in beloved series as long as the quality stays up there. Hey, we have a “Most Satisfying Sequel” category for a reason.

There’s a real danger of letting a franchise get away from itself, though. Sometimes the core design goes off the rails; other times you simply reach, then pass, the saturation point. That’s when it’s time to pause and reevaluate. These are the most egregious offenders we could stand to miss for a year or two.”

“2008 continued the trend of Sega producing bad Sonic the Hedgehog games. It’s a trend that’s been ongoing since, well, depending on your perspective, you could claim it went all the way back to the Genesis. Personally, we pin Sonic’s continuing failure to please on polygons, and the gameplay’s failure to stay true to the series’ high-speed roots. There’s only one problem: Sonic Unleashed has moments that attempt to stick to what Sonic does best–running too fast for you to do anything other than watch–and it’s totally boring.

Aside from a few handheld outings, the franchise has been a mess since Sonic & Knuckles. Perhaps instead of continuing to bash their head against the hedgehog year in and year out, the folks at Sega should take a few huge steps back, take a break, and figure out a new direction. Because it’s become pretty obvious that what they’re doing now isn’t working.“

GiantBomb is a gaming news, reviews, and Wikipedia-style gaming community website, founded last December by former Gamespot.com employees Jeff Gerstmann and Ryan Davis in cooperation with Whiskey Media. Jeff Gerstmann was forcefully let go from Gamespot.com under vague circumstances related to a review he gave to the game Kane & Lynch: Deadmen. The Publishers of Kane & Lynch (Eidos) were heavily advertising on the Gamespot website at the time, and though nobody has ever come out and stated the absolute truth, many assume Jeff was fired because Eidos was unhappy with his review. Jeff’s departure marked a mass exodus of staff from Gamespot.com, including Brad Shoemaker and Vinny Caravela, who joined Gerstmann and Davis at GiantBomb.com when it launched.

Though GiantBomb openly admitted to recieving a review copy of Sonic Unleashed for the Wii the week before it went to retail, no official review for the game has ever appeared on the site. GiantBomb’s unspoken policy has been to only review games that they were interested in reviewing (in other words, they don’t just review every game out there). Most recently, Jeff Gerstmann admitted to having picked up the Xbox 360 version of Sonic Unleashed and sounded off about the game’s flaws on the GiantBomb Podcast for December 23rd, declaring that the game felt like it was made “for children” and that it “practically plays itself”. There is no word on whether or not a review for the Xbox 360 version of Sonic Unleashed will appear on GiantBomb.

Stick with TSSZ as we cover whatever the industry has to say about Sonic – good or bad.