The Blog Sega Doesn’t Want You to Read 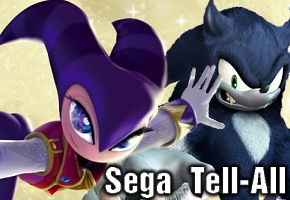 Maybe you’ve heard of this story before, and maybe you haven’t: Back in 2006, an anonymous Blogger by the name of “jpeg” appeared, claiming to be somebody within the game industry. He made various posts about both his personal life and his job (like any normal Blogger), though never anything terribly specific. That all changed in early 2007, when he made a post about NiGHTS: Journey of Dreams. He spoke on a great many things; he confided that he did not have much faith in the game, despite what he considered the best efforts of Sonic Team. He knew of the game’s troubled development, which he used as a segway to discuss the internal workings of Sega and how it related to Sonic Team, claiming that he knew Sonic Team, personally, “on a professional level”.

Given the deliberately anonymous nature of his blog, though, not many people knew whether to believe him.

A month after writing his post about NiGHTS: Journey of Dreams, “jpeg” deleted all of his blog posts and bid farewell to his Blogspot users. Thankfully, however, the internet never forgets: after a little bit of figurative legwork from Green Hill Zone forums user FlashTHD, an archived version of the original blog post regarding Journey of Dreams has been recovered. By now, you are probably wondering why an unconfirmed blog post from an anonymous person on the vast expanse of the internet is so important. As it turns out, one possible reason all previous posts had been removed from the blog is because “jpeg” left a little hint at the end of the post about NiGHTS:

“Sonic Team are a relic from a past age who have overstayed their welcome. For the same marketing reasons that their name was initially kept (and has since backfired) they should be dissolved – it may already be too late for NiGHTS (and I really hope it isn’t and they manage to turn it around, which with Iizuka-san’s passion for the project is a possibility), but for the good of the company’s image; for the future of Sega’s other prestigious IPs and lastly for its iconic mascot it needs to be done… before they release another Sonic game with a transforming Evil ‘Night’ Sonic who looks like a werewolf and can stretch his arms out Dhalsim-style. It will happen, mark my words.“

Over a year before anybody had ever spoken the word “Werehog”, this blog user had tipped us off to the existence of Sonic Unleashed. Obviously, this most likely constituted an illegal breach of NDA, resulting in all posts on the blog being removed.

Today, his blogspot account is still active, containing only his “Goodbye” post. The sidebar of his blog now contains a typical “My opinions are my own and do not reflect upon my employer, and I will not discuss my job with you” disclaimer, but most importantly, reveals the blog owner’s true name: Ben Andac. Ben Andac, as it turns out, worked as a “Game Evaluator” and an “Admissions and Recruitment Executive” for both Sega Europe and Sony Computer Entertainment Europe. Ben’s job was most likely to evaluate the quality of products coming out of the publisher and potentially scout for new recruits to develop software. Ben now works for online gaming website Idle Thumbs, writing editorials and reviews.  (TRISTAN EDIT: Since this story has been published, the Blogspot account linked above has been made completely inactive.)

By confirming Ben’s identity as an employee at Sega Europe, re-reading the March 2007 blog regarding the development of NiGHTS: Journey of Dreams shines a spotlight directly on a side of Sega rarely seen by the public. In particular, it reveals an internal strife between Sonic Team and Sega of Japan, highlighted by the fact that NiGHTS: Journey of Dreams was originally developed as an Xbox 360 and Playstation 3 title – going so far as to say he (Ben Andac) played an Xbox 360 build of NiGHTS at one point. Upon witnessing the overnight success of the Wii, Sega of Japan apparently forced Sonic Team to retool the game for Nintendo’s lower-spec platform, something its producer (Takashi Iizuka) was not happy about. Despite the shift in platform, the game’s fast-approaching release date and limited development budget remained firmly unchanged, giving Sonic Team roughly one year to rebuild NiGHTS exclusively for the Wii (when most games typically take two years or more to develop).

As it turned out, according to Mr. Andac, after Sega had restructured itself to re-integrate external development houses like Smilebit and AM2 back in to the main Sega offices, Sonic Team was kept external strictly as a sweatshop to milk the Sonic cashcow, assembly-line style. Sega of Japan had intended NiGHTS: Journey of Dreams as a brief rest from the never-ending onslaught of Sonic game after Sonic game. In Ben’s own words: “There’s no doubt that Sonic Team have lost their quality touch. They are worse than talentless: they are without passion. Bored, weary, closed-minded and out of touch with any sense of what makes games good anymore.” Quite simply put, after making so many of them, Sonic Team is tired of Sonic games – something Ben cites as a reason for Yuji Naka’s resignation in 2006.

In the end, what this blog really represents is that, even within their own ranks, members of Sega’s staff are unhappy with the direction Sonic Team as a development studio has headed. While it was easy to assume such, we now have confirmation of internal strife between Sonic Team and their parent subsidary, Sega of Japan. In relation, this goes a long way to explain the shortcomings of games produced by Sonic Team: They are forced to work on a franchise they no longer care about, and when they do get a chance to stretch their legs, it is under tight restrictions.

Stay tuned to TSSZ as we cover all aspects of Sonic the Hedgehog and his related franchises.

Sega R&D Producer: Future Classic Re-Releases Depend “On All of Your Voices”