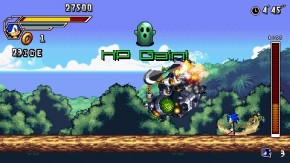 Find Out When to Expect the Next Demo

Speaking on the Sonic Fan Games HQ forum topic dedicated to the game, Streak said that he anticipates the next demo to be out before January 26th.  Also for the first time, he spoke about the story behind the Sonic fan game, and what to expect from the finished product:

Mecha Madness begins with Sonic and Tails flying above South Island where Sonic 2 took place. The plane gets struck by lightning then you’re thrown into the first level where you have to find Tails. You traverse the level then find Eggman looming over Tails. Whoop his ass and a new enemy appears…!

Beat the enemy and a few days pass. Tails works on a new plane, the Tornado II and they set off for the Floating Island to go meet up with Knuckles to see if they know what Eggman is up to this time. When they get there, they are greeted by a flying bee robot that hits Sonic and knocks him out of his super form. Then you traverse Angel Island… Beat the King Buzz Bomber and go into the Queen’s bee hive which is a stalactic cave. The mecha bees inside have made artificial honey which turned into solid rock. This immitation of nature was completely corrupt and hurts the land due to the bio waste. So you beat the queen bee and you fall from the cave into a huge fissure. As you fall, you land in a big city.

This is Hydrocity. The city has now developed into an actual city with sewers and transporation systems. As you move on, you get deeper below ground till you get to the old Hydrocity ruins. You finish the stage and end up in a Hydroelectric plant. Technology seems to be taking over more and more of the island now. The boss there fights hard but you can knock him into the turbines for a kickass finish, lol. The hydroelectic plant blows up.

You’re sent into Marble Garden which is now an overgrown forest. Massive fruits that attack you. Killer plants. You name it. After you’ve gotten to a certain point in the level, you reach the midpoint and everything is on fire! You’ll have to use your water shield to put out the fires and save the garden. When you get to the end, the boss awaits. He set everything on fire. Kick his ass and then you get to Carnival Night.

Carnival Night is split into 3 sections. The carnival, The Casino and then the roller coaster ride. Once you get to the big rollercoaster, it’s a boss battle. He’ll knock away cars on the ride until he destroys it all, leaving you to have to grind down and finish him. Once you’ve knocked him off the coaster, you fall into a chocolate factory… Fun things happen there. After you beat the boss there, you go to Ice cap.

Icecap 1 is a ski resort. You get to do some sick snowboarding for the whole first level. The second level is farther up north. All of the ice caps seem to have melted and there’s alot of green there when there’s not supposed to. There’s a miniboss here but nothing big. You finish the level and get to Launch base where DUN DUN DUN Eggman has set up the Death Egg again.

You climb lots of stairs and platforms… fight some flying enemies and the Death Egg takes off. Funny thing is, at the end of the level as the Death Egg leaves, you fight Eggman who is obviously not on it. Epic fight then you go to Mushroom hill.

MUSHROOM HILL IS SICK. It’s like a bad acid trip. Pools of mud, bubbling acid pits. Corroded plant monsters. Moss, fungus all growing everywhere and attacking you. You traverse here and fight a big moss monster as a boss and you start to hear planes approach. You look up and you find Eggman’s fleet rallying up to fly after the Death Egg which has been mysteriously commandeered by something. Here’s Flying Battery.

Flying battery consists of you F-ing up all of Eggman’s fleet ships as you land on them until you get to the Egg Carrier. When you’re in the Egg Carrier, you fight Eggman again for another epic boss fight then you mess up the egg carrier. As you abaondon ship, the egg carrier crashes into the desert. Here’s Sandopolis.

Sandopolis has big scorpions, crazy sand pits and rock monsters. As you get to the pyramids, you fight a rock miniboss. The Pyramid doors open and you get inside. Now here’s a bunch of crazy ghost stuff. Statues come to life… Platforms dissapear. The entire place has been haunted. The miniboss fight is a huge egyptian golem that has come to life. You go through more of the level then fall into a pit which is the tomb of Solimon. Solimon the Jackal comes out and summons a massive Gold Turtle to battle you. You disable the turtle and mess Solimon. When the gold turtle falls, the sand starts sucking you in due to the mass of the huge thing. You fall through the floor and the huge gold turtle falls into a lava pit which is now Lava Reef.

Lavareef is crazy hot. Lots of lava everywhere so you’ll have to watch your step. Get through here and at the end you fight a massive Lava demon. The pollution from all of the new artificial life robots have flooded into the lava and mixed to form an AI that controls the lava and appears as a big beast. You have to attack the hardened part on it’s face and basically reduce it to ashes. When that’s over, the lava cools down and you get to the Hidden palace zone.

This is a mega crazy bossfight. The big star that was in the first level makes it’s return. This is called Dark Mother and it is the source of all of the pollution on the floating Island. It’s a bio weapon that Eggman was charging in the lightning storm to bring it to life. He thought he could control it but it developed an AI because it was based off of nature… In essence, it has the ability to “give birth” to robots. And the robots come from the DNA of the part of the Island the Dark Mother Star passes. So now that it has collected lots of DNA and Intelligence, it feels a surge of energy. The life on the island all has a common unity. They all live and strive off of the power of the master emerald… So the Dark Mother gets into the chamber and tries to absorb the Master emerald and the chaos emeralds. Here you kick the shit out of it. It retreats and then Eggman comes and tries to strong hand the Master Emerald away from you so that he could use it to destroy his own creation that has taken everything over. You whoop his ass obviously. Then Eggman retreats. he has no more options. it’s now up to you to chase after the Death Egg to which the Dark Mother has retreated.

You beam up to Sky Sanctuary to find lots of nature perverted creatures. Eagles that have turned into gryphons. Big smog clouds that attack you. The miniboss is a crazy big gryphon and it’s babies. This thing is just massive. When you beat it, it crashes down and reveals an old teleporter. You jump ontop of it and it takes you to a higher platform that is near the Death Egg. That’s when Pegasus Volt appears. It’s a horse that has power over electricity. It is pretty fast and powerful. When you beat it, you jet up to the Death Egg.

As you get on the death egg… It is completely different from what you remember. It’s a corroded place with bio metal strewn about. Almost like a living being. There are streams of energy pulsing through it like veins. As you reach the core, the dark mother is there. The star fuses into the core which looks like a massive beating heart and the energy of the Dark Mother along with some of the DNA it has aquired comes out to protect it. It’s a big dragon like beast that is fast and strong. WHen you beat it, the Dark Mother’s true form comes out. It’s a big shadow like creature that resembles a dragon. It can shift forms, throw things at you. You have to beat it’s head in. If you HAVENT gotten all of the chaos emeralds, you beat the Dark Mother and the Death Egg starts exploding due to it’s life source being depleted. You have to escape the Death Egg [Yes, this will be the last level. Things will be falling all over] and return back to the planet. As you fall from the altitude, Tails catches you and brings you back to the island. You can see that the corruption still exists. Plants are still walking. Animals are still mutants.

If you DO get all the Chaos Emeralds, after the Dark Mother true form battle, the Dark Mother re materializes off of the Chaos Emerald energy that it encountered when fighting you. It turns to it’s perfect form. You turn into Super Sonic and break through all of the walls in chase of the Perfect Dark Mother. As you get outside, there’s an epic boss battle in space where you get to use all of your shield energy which is parts of nature itself to fight the abomination. The last battle is nature vs. technology and as you beat the Dark Mother, you begin to fall back to earth. You’ll be falling with the debris of the Death Egg so you can grind on poles and pipes as you fall back to earth. At a certain time, Tails catches you and brings you back to the Floating island. Knuckles greets you and shows a happy face. The island has been restored. No more corruption of nature. The game ends with you flying off of the island and having the classic Sonic 3 type ending.

Also noteworthy from Streak Thunderstorm is news that Tails will become part of Mecha Madness as a follower.  That doesn’t sound important, but it’s good news for other Sonic fan game developers, as he will submit the resulting Tails engine as part of the ongoing Sonic Worlds game engine project.  In fact, he’s already submitted a draft.