TOUMA: The Man Who Birthed a Sniper 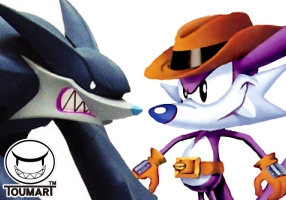 Whatever happened to Fang the Sniper?

For a long time now, the Sonic community has had sort of a strange obsession with Fang the Sniper (who’s name was changed to Nack the Weasel for his English debut). Over a decade before Shadow the Hedgehog gripped the stock of an Assault Rifle, Fang the Sniper was sharpshooting our fuzzy blue hero with pinpoint accuracy. However, after his starring role in Sonic Triple Trouble on the Game Gear (followed by a couple of cameos in obscure Sonic spin-offs), Fang vanished, joining the ranks of forgotten characters like Ray the Flying Squirrel in some vault deep within Sega’s offices – sort of, anyway. Perhaps it was his role in Archie’s Sonic the Hedgehog comic books, but fans never really forgot about Fang the Sniper. Even today, there are calls to bring him back again in new Sonic games, much like how The Chaotix was reborn in Sonic Heroes as the “Team Chaotix Detective Agency”. There seems to be something about Fang the Sniper that people are drawn to. So what happened to him?

Sonic Stadium forum user Polytechnik has sought to answer that question with this topic entitled, “Why you will never see Fang/Nack ever again.” In it, Polytechnik reveals Fang’s original designer is a man named Touma (who’s personal blog is here). Polytechnik uncovered an archived interview Artoyz.com had with Touma back in 2004, where he reveals that Fang the Sniper was his first job as a character designer for Sega, and that he remained with the company for 10 years – leaving in 2002 to become a freelance Figure Artist, creating vinyl “designer toys” in Japan.

Among interest of Sonic fans are Touma’s Fang Wolf line of figures, which bare a passing resemblance to the Sega’s long lost Sniper – This is on top of the old speculation that Fang himself was actually listed as a Wolf (or perhaps some sort of Wolf/Weasel-hybrid) in his original Japanese character profiles – making it clear that Touma still keeps a special place in his heart for Fang’s character design, blue nose and all. Perhaps even more interesting is Fang Wolf’s resemblance to the recent Werehog transformation Sonic underwent in Sonic Unleashed, what with the cobalt blue fur and long, muscular arms. From certain angles, the shoulders on Fang Wolf even resemble Sonic’s trademark quills.

Though Polytechnik suggests that perhaps Touma still owns the rights to Fang the Sniper (citing this as the reason he has not been used recently), other forumers suggested that this was not the norm in situations like these – typically, character designers create characters for a parent company, and the parent company owns those characters regardless of whether or not the original designer is still employed there. Further evidence towards this conclusion lie in Fang’s frequent appearances in Archie’s Sonic the Hedgehog comics over the years (where he retains his American name, Nack). There, Fang fills in the position of Assassin and Mercenary for hire – usually employed by the bigger bad guys – and has spent considerable time in Knothole Prison after numerous jobs of his have gone sour.

For those of you worried that Fang will never appear in another videogame, have no fear: ArchAngelUK, writer for Official Sega UK blog Sonic City, says that Fang’s cult following has “been noted” by Sega officials, but relays the difficulty of getting a character like Fang to come back:

“Bringing back Nack would ultimately involve crafting a game of which Nack’s reappearance would be an essential part of the story thus justifying his return and the time neccessary to redesign and retool him to fit in with the current canon.

He can’t be a thief because thats Rouge’s roll now. If he was a mercinary for hire that’d be treading on the Rogue’s ground. In all seriousness, where does he fit? I like Fang/Nack but how do you get him back in without devaluing someone who is already there? And no ‘why can’t they just do it’ is not an answer.“

ArchAngelUK also confirms that Fang does indeed appear in a piece of winning artwork submitted for Sonic & The Black Knight‘s fanart contest some months ago.

In the end, all any of this means is that while Fang the Sniper is gone, he has never been forgotten – and while a major role in future Sonic games is unlikely, it’s not impossible. Until then, Fang will remain what he has always been: a mischevious-looking character design with a nice hat who had the misfortune of appearing in games most non-Sonic fans have never played.

But you can be sure that if Fang does make a come back, we here at TSSZ will tell you all about it.