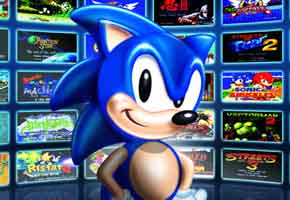 If you were hoping to lock-on any number of Sonic titles within Sonic’s Ultimate Genesis Collection with Sonic and Knuckles, be ready to be disappointed.

Through the way of a few early retail leaks, some gamers have been able to play through the compilation, officially set for release Tuesday in North America for the XBOX360 and Playstation 3.  Attempting to find any sort of way to link Sonic and Knuckles with any other Sonic game, in particular Sonic 3–has lead nowhere, and that includes with the unlockable extras.

One YouTube video has surfaced showing a playthrough of the various titles in the game, and it’s here you’ll see the impossibility of the lock-on task.

Further details have also emerged that have the game referring to the lock-on method in the past tense.  TSSZ News has obtained this image from the game.  It’s from a history page of Sonic and Knuckles, and it clearly says that Sonic 3 and S&K were planned to be in one large game, and that the lock-on method opened up new material, be it the Blue Spheres stages or Knuckles in Sonic 2: 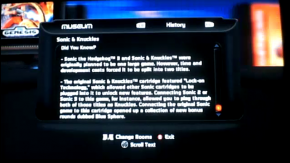 Why did Sega do this?  Some fans speculate it’s to drive up sales of the Sonic Mega Collection, which was recently re-rated for XBOX Live.  If no workaround can be found, it’s at best a slap in the face to classic Sonic fans who may have contemplated purchasing the disc simply for such a feature.  You may remember that such a feat is not hard to do–in fact, Sega included the feature when Sonic Jam was released…in 1997, for the Sega Saturn.

We want to know what you think of this.  Should Sega have included at least Sonic 3 & Knuckles on the disc, or the possibility of locking on?  Do you think the company had ulterior motives for lacking lock-on.  We welcome your thoughts in the comment box below.