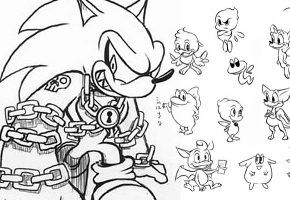 As gaming and internet culture become constantly more intermingled, giving the development team a way to talk about the process of making their game has become increasingly popular. After Sonic 2006 was released in Japan, for example, its director, Shun Nakamura, was given a developer blog to talk about the creation of the title, and that trend continues with not one – but two Sonic Unleashed developer blogs.

The first blog, the Director’s Blog, offers up the thoughts of Sonic Unleashed director Yoshihisa Hashimoto on things like the recent Japan review scores. A Japanese-to-English machine translation (which I have cleaned up to be more readable) tells the story:

Other blogs talk about content already covered prior to the North American release of the game, such as the nature of 2D and 3D gameplay together, and the length of time inbetween 2D and 3D sections (around 20-30 seconds of gameplay for each 2D or 3D section).

The other developer blog is called the “Hamidashi Blog“, which is run by two women: Natsuha Matsubara, the level designer for Sonic Unleashed, and Utako Yoshino, who wrote all of the dialog for Town NPCs.  Both are characterized as two  floating heads: A woman with a long face and blue hair (Matsubara), and another with swirly pink hair and a childlike face (Yoshino). The pair talk about their experiences on Sonic Unleashed and interview a number of Sonicteam employees. Their most recent blog celebrates the relese of Sonic Unleashed in Japan, featuring an interview with the Director about Sonic Unleashed’s level design. Machine translation to the rescue:

Yoshino:  “An enemy here, a spring there, a slope here”… it is hard work deciding on the contents of a stage.

Hashimoto:  It is very difficult creating good levels for Sonic. I recall we had been working on this one level for a really long time, and right before we were about to finish it, we scrapped that version and remade it from the beginning.

Matsubara:  (shoulders slumped) The tears Mr. Okada had after that incident will never be forgotten…

But of most interest to Sonic fans are the Hamidashi blog entries on the art of Sonic Unleashed, including never-before-seen concept art of the Werehog and Chip. An interview with Shinkichi Tanahashi (Lead Character Designer) provides insight in to the creation of the Werehog: 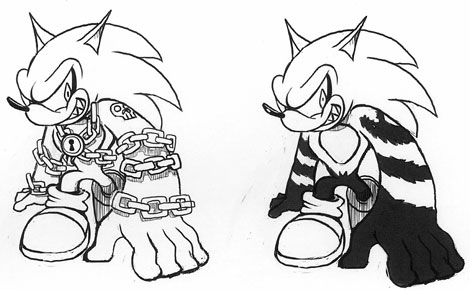 Matsubara: He’s so different! Coolness just oozes out of him.

Tanahashi: The concept I was given to work with was Sonic transforming in to a beast at night due to a curse.

Tanahashi: The story didn’t really exist yet. Sonic transformed in to a beast because of stories of cursed men becoming monsters at night.

Matsubara: Hey, I just noticed!  His gloves are gone!

Tanahashi: Because the Werehog attacks with his claws, I removed his gloves. But, because this character was supposed to be Sonic, I kept his iconic shoes.

The machine translation gets rough at this point, as they discuss why Sonic’s shoes become spiked in the final Werehog design. The next image… 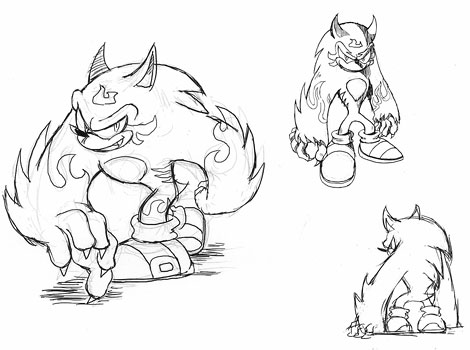 Yoshino:  This design isn’t too different from the final.

Tanahashi:  I wanted to make Sonic look very strong, so I changed his general form. The shoulder and the head are connected by a single line, and his chest is much more broad, giving his body the appearance of an inverse triangle.

The final piece of Werehog concept art is perhaps the strangest: 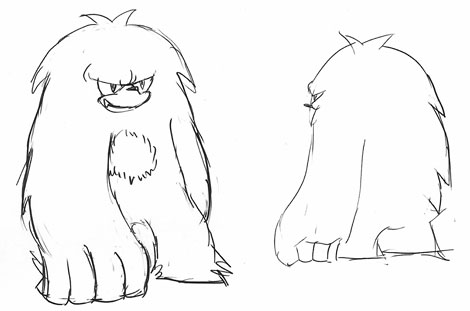 Tanahashi: Oh, there’s this one. 🙂

Matsubara: … what… IS this?

Yoshino: It looks like a Yeti. This concept looks kind of silly.

Other posts on the Hamidashi blog include looks at concept art for Chip, too. 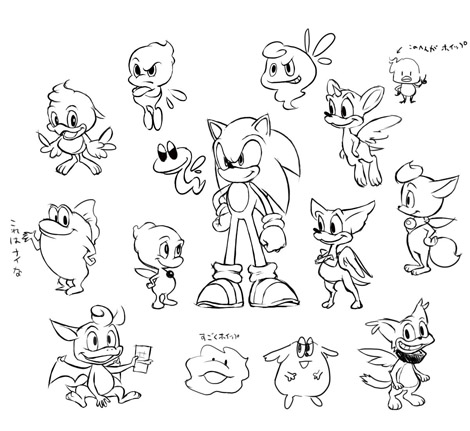 Sachiko Kawamura: Early on, we wanted a name like  “Whip”.

Matsubara: What a pretty name! Whip Cream is so delightfully fluffy and light…

Kawamura: Yes, and because of that, Whip Cream becomes an early design motif.

Yoshina: A lot of these characters look very soft.

Matsubara: Look! One of them is a fairy.

Yoshina: Why didn’t you choose the name Whip?

Kawamura: When translated in to english, the name Whip brings to mind different connotations, like being punished or suffering injury (whiplash). Sega U.S.A. was not happy with this name.

Many other posts exist of the pair’s antics around Sonicteam’s offices as they talk about the game’s official soundtrack, talk about the Global Illumination technology, visit a messy co-worker’s desk, and even comment on Archie’s Sonic the Hedgehog comic book:

Yoshino: Is this… from overseas? There are an awful lot of them.

Matsubara: Sonic is a popular character all over the world! Speaking of the world’s fastest, coolest, bluest hero, which Sega is very proud of, did you know that there’s even a gene named after Sonic?

Matsubara: I remember my first experiences with Sonic games, ten years ago on the Game Gear… that cool, blue figure…

Yoshino:  (…Matsubara has her head in the clouds, again…)

In all, these blogs do have some genuinely interesting content in them as long as you have a translator handy. Speaking personally, I kind of wish Sega had done like Nintendo did with Smash Bros. Brawl and translated these in to english.

If any more interesting content turns up on these blogs, TSSZ will keep you posted.

No PSO at GameCube Launch?