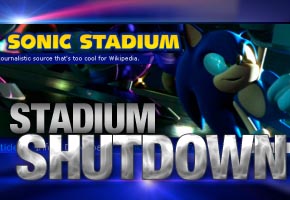 Admits Mistakes Made Regarding Backups

Many of the main articles on the Sonic Stadium have returned, as the site rebuilding process of TSS continues.

Using a combination of old archives via the Wayback machine and Google caches, Svend Joscelyne, better known as Dreadknux, has managed to restore most of the site’s front page articles from this year.  The process of restoring past articles, as well as other sections, will continue for some time.

Dreadknux has posted a statement regarding the site outage and exactly what went wrong.  In it, he admits he could have been better with backing the site up, but also blames the Apple Time Machine utility for not working as advertised.  Dreadknux thanks those who supported him, the site, and its staff during the difficult week, and urges naysayers to give them a second chance:

Considering the servers had been randomly crapping out every now and then the week leading up to the wipe, I’m obviously annoyed that I was dumb enough to not make regular backups up until the fateful incident. To be fair, I did have backups for both TSS and SSMB from the 15th February – but alas, when Apple says Time Machine ‘works’, what it really means it ’selectively works’. Those backups were indeed lost, and it was by good fortune that I was using a copy of the TSS backup actively on my localhost that we avoided total meltdown.

While I’ll happily call myself an idiot for not taking necessary steps, you can call it karma or whatever you want, I must extend my thanks to those who wished us well (and still do wish us a speedy recovery), be it other sites like Sonic Retro and TSSZ or individuals that visit them. I guess the majority of the Sonic community aren’t total retards to a fellow fan’s tragedy, despite whatever views they may hold of each other. For example, I can’t say we’ve had the best relationship with TSSZ as of late, but I’d like to say this event has forged a new-found respect for one another in the very least.

Sonic the Hedgehog is a franchise primarily for kids, so it stands to reason that a lot of those in the community today are in fact children or young teenagers. I guess it stands to reason that there was a bit of negativity towards us when word got around of our troubles. When they get older they’ll understand that we do in fact love Sonic and indeed his later games too – I’m playing Sonic Unleashed while writing this update (I’d be playing Black Knight, but it’s not out in the UK yet) in fact.

The whole “TSS hates modern Sonic 100%, SSMB hates anyone being critical of the franchise” is a misconception that has captured the mind of the young, and it’s something I hope we can use this opportunity to show that this is not the case. We’re just a bunch of adults that grew up with the blue blur and still love to cover his franchise, for better or worse. We may be critical at times, but who isn’t? That’s human nature.

So to rebuilding TSS and SSMB it is – I hope those that have enjoyed our fan coverage will continue to enjoy it, and those that see us negatively get the opportunity to maybe see us in a different light. After all, we may not like one another’s opinions, but it’s silly to outright hate someone for it. We’re all fans, in this community together. Let’s make the most of it.

I’ll use this as a chance to say that old articles, reviews, previews and (hopefully) news that were written by TSS staff before the change to WordPress in 2008 are being added to the archive, extending our information database to cover the rich history we have enjoyed online. I am also working on revamping the site design, with an aim to return the site to it’s 2007 information-heavy glory days. All the while, we’ll be trying to recover our most recent articles that we lost (we’re prioritising with big-hitters like our interview with Archie legend Matt Herms and other articles).

Despite progress accelerating on the Stadium’s rebuilding efforts, it will still be some time before TSS returns to its full glory.  TSSZ News will keep you up to speed on developments.