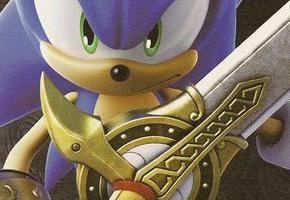 Newly acquired by Hearst, 1UP.com has weighed in on Sonic and the Black Knight, and reviewer Sam Kennedy is less harsh on the title than some of his counterparts, awarding the game a C+.

However, that may only be because he admits his expectations for the whole franchise have been lowered considerably.  Kennedy opens up his review with a sweeping editorial comment on Sonic:

You know, at this point I’ve given up on hoping for more from the Sonic franchise. It’s pretty clear there’s a big disconnect between what gamers want — a true Sonic sequel without any of the gun-toting, hoverboard riding, lame character befriending that seems to muck up all of these games — and what Sonic Team are consistently delivering. Most recently, I had genuine excitement for Sonic Unleashed — until they messed it up with the Werehog bits. I’d perhaps feel bad if these design decisions were being dictated by Sega’s marketing people, but, knowing how Sonic Team tends to operate pretty autonomously, I’d guess they’re not. Seems those guys are simply reluctant to release any new Sonic games without some sort of unwanted and unnecessary gimmick.

Adding that Sega did not provide 1UP with a pre-release copy of SBK, Kennedy says the game suffers from monotony, from the simple control scheme to the enemies you fight:

There’s a bit of depth in finding hidden pixies and upgrading your special attack, but, for the most part, the game consists of fighting the same enemies over and over. You do encounter the occasional boss, but even then Black Knight suffers from the too common Wii issue of “waggle triumphs all.” Try to play it “right” and you’ll struggle — just wave the controller as much as possible while jamming on the buttons and you’ll find the game’s a breeze.

1UP’s user ranking for the game so far stand at a B.  SBK’s Metacritic ranking presently stands at 55 out of 100.  TSSZ News will continue to bring you the scores and perspectives on SBK as they come in.