Are You a Console War Veteran? 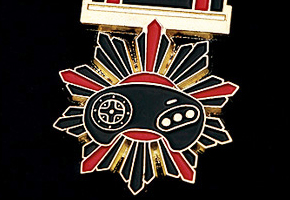 Show your allegiance to the cause  with nifty controller medals

The 1990’s were a rough time for computer game playing kids. On one side of the playground were the Nintendo kids and on the other Sega kids. The battles between the two would be bloody and fierce but that particular battle would be ended a few years later with the arrival of the PlayStation. But for those of you who fought the good fight in the name of the Mega Drive/Genesis it’s time to collect a medal for all the hard work.

Ok, so when I say collect, I actually mean buy. Thanks to supermandolin you can purchase your very own Mega Drive/Genesis pad medal to wear proudly on any shirt, bag or other item. The heretics are also catered for with NES, SNES and PlayStation controllers but obviously the only one worth buying is a Sega one. Should any of you lot end up with one of these fantastic medals e-mail me and I’ll even put your picture in a future story in which to show it off. Think of it as a further reward.

No PSO at GameCube Launch?