M&S Olympics Back in Britain Top 10 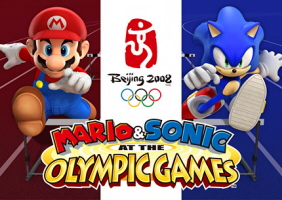 To the surprise of absolutely nobody, Mario and Sonic at the Olympic Games has returned to the British Chart Track multiplatform game charts in the top ten.  But what is very surprising is that Sonic Unleashed isn’t far behind.

M&S hit #9 in the charts out of the top 40 for last week.  That’s slightly up from the previous week’s #12 ranking.  For any title to maintain such consistency anywhere should give you a good idea of what to expect come release time of Mario and Sonic at the Winter Olympic Games, slated for later this year.

Only five places off that mark, however, is Sonic Unleashed.  Though no specific version–be it the Wii/PS2 edition or the next-generation one–is noted, that game jumped seven places from its spot last week, to #14. Previously it was at #21.  Not very long ago, it was in danger of completely falling off the charts.

Nintendo’s Wii Fit maintains its position as the #1 selling “game” in Britain for the week.  Sonic and the Black Knight is nowhere to be found.

Sonic 2 on iOS Gets Update