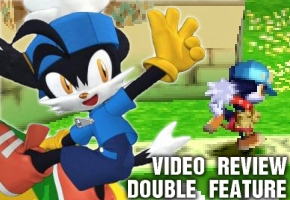 For over ten years, Namco has tried to make something out of the Klonoa franchise, but for some reason, it’s just never managed to achieve the same sort of staying power you got out of  Mario or Megaman. But that hasn’t stopped Namco from trying to find their groove with the franchise; Klonoa himself has seen numerous redesigns, and starred in many spinoffs – everything from action RPGs (with Klonoa wielding an energy sword) to Beach Volleyball. With Klonoa being released on the Wii, we go back to look at the original Playstation Klonoa game, and its Playstation 2 sequel.