Exact Location of Summer of Sonic ’09 Close to Confirmation 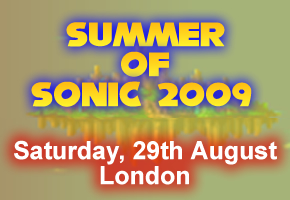 There is one small but important detail to pass along regarding the upcoming Summer of Sonic 2009 event later this Summer in London.

Earlier this week a one sentence Tweet on Sega’s Twitter page noted that a meeting took place regarding the fan event Tuesday.  Much of what went on in the meeting was not disclosed, but this tidbit was:

Right – am back from a meeting on Summer of Sonic, hopefully location will be secured soon!

Generally, the sole London location of SoS 2009 has been known for quite some time.  But where exactly fans will be going isn’t so clear, and current expectations show that a somewhat bigger venue will be needed to host the event.

When the location is confirmed and details are made public, TSSZ News will pass the information to you.