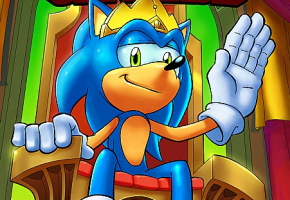 A preview to the upcoming July 22nd (comic shops) issue of Sonic Universe #6 has been released, posted first on the BumbleKing Comics Forums. The preview features a cover shot of issue 6, and a look into the first 5 pages of the comic, including a appearance by Silver the Hedgehog. Thanks to Fairfieldfencer for the preview!

“Dark Seige”: In this second installment of “Mobius: 30 Years Later,” the stakes are raised to pulse-pounding proportions! King Sonic has received dire news from Silver: something that will doom the future is right around the bend! Things go from bad to worse when Lien-Da and her Dark Presence invades the castle! Who will escape, and who will be the first to fall? All this, plus another surprise returning character revealed!
SCRIPT: Ian Flynn
ART: Tracy Yardley
Shipping Date: July 15th, 2009
On Sale at Comic Specialty Shops: July 22nd, 2009
On Sale on Newsstands: August 4th, 2009
32-page, full color comic
$2.50 US

That Other Needlemouse Project Sees Update