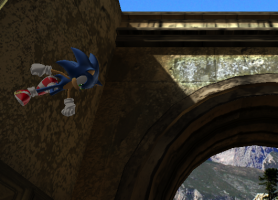 According to Some Pranksters, Something Like This
What’s the deal with this photo anyway?

The pretty picture got a whirlwind of attention when we first published it this morning. An anonymous tipster sent it in, and speculated whether there was a collaboration afoot.

As it turns out, the pretty picture is just that. It was part of an elaborate hoax concocted by some of the community’s best and brightest, all part of the fun and games of this year’s SAGE.

But it didn’t start out as a hoax.

Several community members, including Sonic Nexus’s Brad Flick, Endri Lauson of Sonic Attitude, Streak Thunderstorm of Mecha Madness and perhaps others were brainstorming late last night just what the ultimate Sonic fan game would be. They determined it would be in 3D, look something like Sonic Attitude, and in the end, this mock-up was conceived. 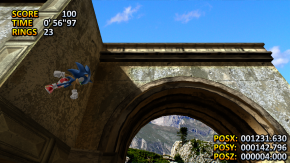 It certainly is a pretty picture, and, for the moment, the concept of Sonic Nexus Attitude XG: Mecha Madness Rebirthwas born. In good fun, of course.

What was fun eventually morphed into a hoax, perhaps unintentionally, when that tipster sent the image into us. We don’t know if the tipster was in on the joke, but we do know it was labeled as a hybrid of two existing games, Sonic Nexus and Sonic Attitude, and we’ve left that naming mechanism on the file. We published the picture anyway, called it “mysterious,” and asked both Flick and Lauson to say something about it–not necessarily in that order.

As more people paid attention to the photo, we received a request from Lauson to remove the photo, as he claimed them to be the leaked roots of a “private work.” We didn’t. It may not have mattered, due to the distinct possibility that Lauson himself was in on the joke.

But we didn’t think it was a joke, so we published Lauson’s response, and indicated something may be afoot. Almost immediately, comments and news tips poured in, indicating different ends of the truth spectrum from “you’ve been duped” to “no you haven’t.”

It felt time to set the record straight, so this reporter went live into the SAGE IRC chat to find out. With some background, a simple question was asked: Is a collaboration happening or not?

In the face of seething anger, relayed to chatters–of which nearly all who concocted SNAXG:MMR were in attendance at the time–a log that noted this purported collaboration had something to do with the as yet unreleased and allegedly canceled full edition of Sonic Rebirth. (It isn’t canceled, by the way–that was part of the joke.) The log itself had been from a few hours ago–and, as it turns out, was, in whole, part of the fun and games.

After showing the log except obtained and a few blown stacks later, the information seemed clear, and a follow-up was written. You may have seen it. You won’t be anymore.

As it turns out, that anger was also a joke, because the whole thing evolved into a joke. A deliberate one.

Several revisions and edits–and, admittedly, a bit of personal anger later, what we have above is what we started with–a very pretty picture. We’ll keep it online, because at the end of the day, it is a pretty nice screenshot, (and according to Lauson himself below, it in likelihood will be a part of Sonic Attitude), a sign that some day we may see fan games of this caliber, in full motion, without glitches, complaints, delays or cancellations.

Can’t you take a joke? This reporter certainly fell for one, hook, like and sinker, and if you weren’t in on the joke, I regret you had to be an inadvertent part of it, because in the end, we relayed misleading information.

But the real butt of the joke may rest on the pranksters themselves.

The legacy of the one screenshot sized fan game collaboration that wasn’t in Sonic Nexus Attitude XG: Mecha Madness Rebirth is that it may sow the seeds of one of this community’s many unsavory reputations. SAGE may be all about relaxing and engaging in fun and games this year, but in the core of its long, storied history, it’s also been about showing the latest and greatest work to an expanded audience, and the core participants in this prank didn’t have anything new for show at this year’s SAGE. For all the effort put forth toward jokes at the expense of others–for cheap laughs and mockery–if that same effort was better spent finishing fan projects and putting care into what the expo is all about, the punchline at the end may not be developers’ credibility staring in the face of projects that, like so many others, were never bothered to be finished.

There, nobody will get the last laugh.

(Thanks to Endri for clarifying the name for some reason.)