The Stakes of the Sonic CD iPhone Port 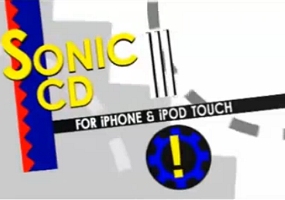 Taxman: “I’m not naive” About Prospects

On Tuesday, many Sonic community members saw Christian Whitehead, known as The Taxman, drop a bomb.

By Wednesday afternoon, Taxman swiftly sought to clean up the fallout from that bomb.

That fallout, when all is said and done, spells nothing but good for serious fan game developers who have professional hopes.  The viral debut of Taxman’s Sonic CD port to the iPhone using his Retro Software Development Kit quickly caught the attention of Sega of America.  On Monday, the company announced through its blog an open call for suggestions of old Sega fare you’d like to see on Apple’s advance mobile devices.  On Tuesday, Taxman’s incredible advancement caught the attention of gamers around the world, netting his video tons of views, and propelling his proof to celebrity status.

But on Wednesday, this was the final message placed on the website complementing the tech demo video before the page–and video–were thrust offline:

I can’t show you the ‘face’ of Sonic CD on iPhone right now… Sorry kids, hope you enjoyed looking at it, and hopefully you’ll see it again soon 😉 Remember, if you would like Sonic CD, let SEGA know.

Later, the Taxman sent a statement to TSSZ News proclaiming that he could no longer talk about the status of the project, or his alleged ongoing talks with Sega that was a part of the “bomb” announcement.  He’s the not the only one who fell silent Wednesday.  Sega of America’s own call to arms, originally published Monday, was also taken offline as of today–though the Tweet acknowledging the receipt of the video still exists on Sega’s Twitter feed.

Today, it appears both sides stand in silence.  Is that sign of progress or deadlock?

Hours before Taxman went silent, he sent on the record comments to TSSZ News that offered personal insight on how he felt any negotiation with Sega would go.  They are his final public remarks on the Sonic CD iPhone port, in its current state.

“It’s hard to tell what SEGA will do…but obviously I’m not naive about the whole process,” Taxman told TSSZ News, making clear that he only wanted to offer Sega the ported game that came as a result of the RSDK development.

“I’m simply offering SEGA a chance to have Sonic CD developed WELL for the iPhone,” Taxman continued.  “I’m the only one who really knows this engine inside out.”

Such an advantage could be critical for the Taxman, if negotiations are both currently underway and serious.  Sega has been criticized for porting classic games in subpar manners.  For the Sonic community this was most evident in the Game Boy Advance port of the original Sonic the Hedgehog.  More recently, fans lambasted Sega for unacceptable flaws in the iPhone/iPod Touch port of Streets of Rage.

But business could get in the way of that advantage.

“Publishers normally want to have as much as they can for themselves,” notes Sonic Retro tech member Sik on the matter. “Remember that in most of the cases those engines that are licensed are made by either big companies or companies owned by other big companies. Otherwise publishers will try to buy the rights to the engine and continue developing it themselves.”

That’s the core problem–all indications are that Taxman only wants to sell the port to Sega, and not the RSDK as an addition to a package deal.  As most business goes, any deal that goes on the table may pose an “all or nothing” scenario.  So, in a worst case situation, if Taxman won’t sell the RSDK rights to Sega, you won’t see any of his work on any device.  And because his proof of concept is based on a property Sega owns, there could be legal implications regarding intellectual property use that, should Sega opt for the bullying route, may not only impact Taxman, but others working on similar game engines, or the community at large.

That scenario, of course, is speculative at best.  All indications are that, to this point, any negotiation conducted between Taxman and Sega have been professional.  And should Taxman reach an agreement, it could open the door wide open for other enthusiasts with similar concepts and ideas who have an idea to pitch.  For those willing to see their fan projects through, the Internet could, quite literally, become serious business.

Is Sega willing to meet Taxman halfway?  And if not, is Taxman is willing to make such a profound leap and give up something he has worked tirelessly on?

“If the latter is the case, then the deal is more than likely off,” Sonic Nexus producer Brad Flick speculated on the Sonic Retro thread dedicated to the port.  “He’s looking for a license for the finished product and that’s all.”

Flick and his Sonic Nexus team members have a major stake in Taxman’s decision, because Nexus runs off the Retro Software Development Kit.  If the engine is sold to Sega, it would become the company’s exclusive property, rendering it unavailable for fan game use.  In all likelihood, that would reset all progress made on Sonic Nexus thus far, if not kill the fan game completely.

“Taxman has full rights to his engine, unless he himself surrenders them,” Damian Grove, who is building a competing open-source engine dubbed ProSonic, commented on the same thread.  “Even then, Sega doesn’t want to be seen as a bully, so it would be completely idiotic for them to tell Taxman he can’t do anything with his engine. I’m fairly confident Sega wants to play nice here.”

Dean Sitton, a former Sega employee, thinks that even if a deal is reached for only the Sonic CD port, the basics of the engine may still be compromised and tinkered with.

“Fact is engine or no, if you make a deal, you don’t dance with the devil, the devil dances with you,” Sitton warned in the same topic.  “So you’re not only selling the “game” but half of its engine, assuming there’s some tech support/debugging going on.”

None of these words really matter in the end–if something serious is happening behind the scenes, it will be the Taxman to decide what he wants to do, as it is his work.  But, having read some of the reaction to his breakthrough, he told TSSZ News before falling silent that give and take will be necessary on both sides.

“Whatever the outcome, any deals made must be worthwhile for both SEGA and myself,” Taxman said.  “Otherwise it’s just as likely to fall through if both parties aren’t satisfied.”