Strange, Since Sega Has a Korean Division

Is this the first sign of a deeper relationship developing between Sega and Nintendo?

TSSZ News has received word that Nintendo’s Korean division will be releasing Sega developed Sonic Rush Adventure in South Korea.  Nintendo will be localizing, marketing, and otherwise treating the title as if it were one of its own games.

It’s not so rare for Nintendo to take this step; they have done so with the Professor Layton series of games outside of Japan, and with other games on their systems.  What makes the move a little more unusual are reports that suggest Sega has a division set up in the Asian nation.

Given Nintendo’s partnership with Sega on items such as Mario and Sonic at the Olympic Games and even matters like Super Smash Bros. Brawl, it’s best not to look too far into this beyond it being a business decision.  Sonic Rush Adventure will be released in South Korea on September 17th.  We have the box art below.  Thanks go out to Brazilian Hedgehog for letting us know of the information via our News Tips system. 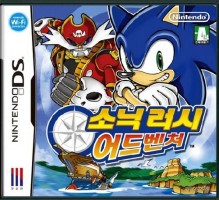