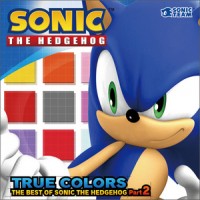 Classic Sonic Gets a Bit of Love

The Japanese Sonic Channel blog today revealed the full track list for December’s release of True Colors: The Best of Sonic the Hedgehog vol. 2.  It’s the next in a series of Sonic themed compilations from Sega.

Recent Sonic is well represented and remixed, with a couple cuts of Dreams of an Absolution making it, as does All Hail Shadow and a new remix of Open Your Heart.  Noteworthy is how the ending theme to the international edition of Sonic CD, Believe in Yourself, has a place.  Very surprising, however, is representation of Sonic 3 and the original Sonic ANIME.  It’s not Sonic X–we’re talking about the original OVA released in 1996, with an American release in 1999 by ADV Films.  An edit of “Look-a-like” is a part of the album.  Also making the cut is something called “Sonic3 MegaD Mix,” which had previously been released through the Sonic Gems Collection.

Inside the Pages: Sonic Universe #30