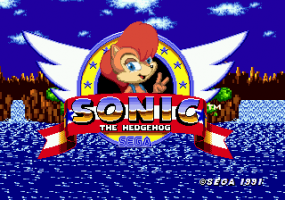 Near Complete, How it Plays Inside

This should be of note for fans of SatAM or even the Archie series.  A mod of the original Sonic the Hedgehog allows players to run through the game as Sally Acorn.

Sally, who only officially made a cameo in Sonic Spinball, hasn’t been seen or heard from in the official games since.  So, who better than a fan–in this case E-122 Psi–to get it just about ready for prime time.

And judging from the video we have below of the mod in action, Sally and her sprites seem to fit pretty well through the special stages, and even while tackling Robotnik and that wrecking ball.

If you’re interested, you can download the mod via Saturday Morning Sonic, which is a TSSZ News affiliate.  If you need some convincing, the game is in action below.  Thanks to all the news tipsters–too many to list here–who sent this into us.