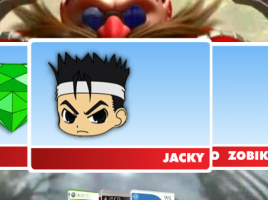 Is it Jacky, or Akira…or Both?

Just into us from a News Tip by SoNiC FReaK is news that the official website for Sonic & Sega All-Stars Racing has opened…but that is not the big news.

The big news is embedded within some of the page’s own details.  A check of the All-Star Move explanation reveals a section for what appears to be a Virtua Fighter character.  The artwork suggests it’s Akira Yuki, but the type suggests it’s Jacky Bryant.  We don’t know which one it is, or if it’s both.  It is possible that Jacky will be the main character, with Akira appearing in an all-star move.  However, it now appears certain there will be a Virtua Fighter presence in the game.  There is already some speculation as to whether these will be the Virtua Fighter Kids and not their adult counterparts, but that is not yet confirmed.

This means there are now 3 or perhaps 2 characters left to be revealed.  We will bring you more information as it develops.  Again, expect either Akira Yuki, Jacky Bryant, or both characters in Sonic & Sega All-Stars Racing.