TSSZ News has obtained some of the code that is purportedly behind the site design of the official website for Sonic & Sega All-Stars Racing.

The information, sent in as XML files, checks out as legitimate, and once again proves that no matter how hard Sega tries to hide information, even the littlest of morsels can’t be covered up.

At the request of our news tipster, who also checked out as a legitimate source but also wished to remain anonymous, we are not hosting those files here, aside from images.  But the files reveal that most, but not all of the information we need to know about ASR appears one or two clicks away from being thrown online, including track information, and hints on more weapons, as well as the remaining three characters to be revealed. 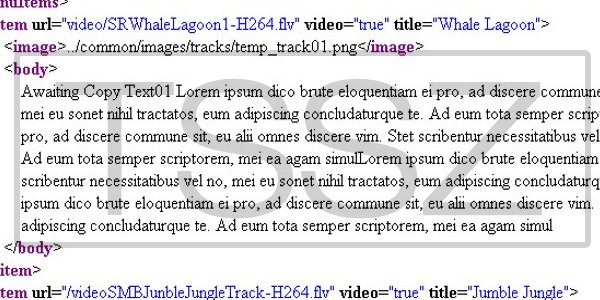 Let’s start with tracks: The information we have only discloses eight of them.  Most of them we know about, including Jumble Jungle, the Jet Set Radio stage, Final Fortress, Curien Mansion, Blizzard Castle, and Casino Park.  As you can see, there is no description attached to any of the tracks at this time, but once online, this will provide a clearer view of what conditions to expect from each track.  (And before anyone goes trying to track down the video URLs briefly shown here, we checked–they don’t work yet; they appear to be placeholders.)

There are also two you may not know about.  We found information setup for a Samba de Amigo themed track, under the presently misspelled title “Samba de Amido.”  There’s also another new, not yet formally revealed track in the file, called Whale Lagoon.

As with Samba de Amido, we don’t know a lot about the origin of these names, but with Whale Lagoon, it’s even tougher to guess.  We do know that there were a lot of humpback whales swimming in Sonic Unleashed‘s daytime Holoska stage, and some fans are speculating if a small piece of video released on the site today that was predominantly on a snow and ice landscape indicates Holoska will be a part of the track roster.  We will soon see. 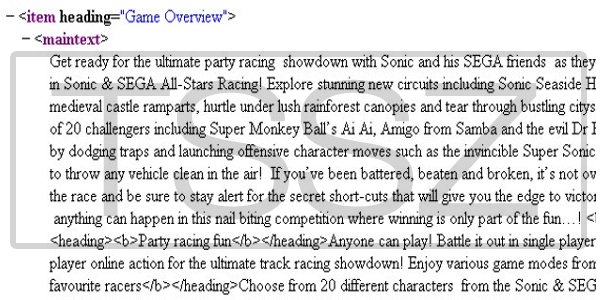 We also got some code on the site’s general information section, and while Germany has released Wii specific details, the rest of the sites–spanning the U.S., Britain, and Australia, haven’t.  That information is embedded within the code, but it’s nothing that wasn’t already known: 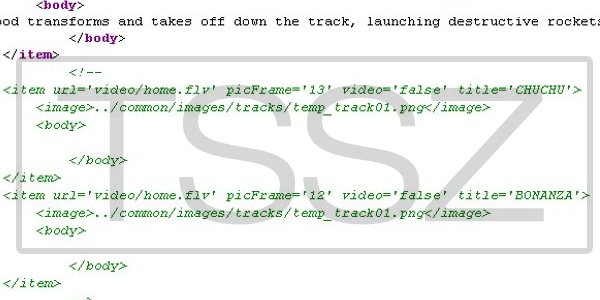 Finally, we dig into the “Moves” section, which encompasses both All-Star Moves and general weapons.  It appears every weapon has been disclosed on the site, according to the code we’ve obtained.  But there are three more All-Star Moves yet to be revealed.  And that makes sense, as there are three characters still under wraps, not counting who now appears to be Jacky Bryant–though we still can’t explain why it’s Akira’s juxtaposed picture from Virtua Fighter Kids that we showed you First @ TSSZ.

Those three characters already have three All-Star moves assigned to them in the code, each assigned cryptic codenames: “CHUCHU,” BONANZA,” and “PARTSHOP.”

Immediately, because hints of Ulala’s All-Star move have been hinted at both in the finished website and in the code to be more Morolian and less “Up, Down, Up, Chu, Chu, Chu”, ChuChu may be referring to the presence of ChuChu Rocket! in the game.  If that is the case, it would be the final Sonic Team IP still scheduled to be revealed, and would affirm widespread speculation that NiGHTS is not in ASR.

As to what “BONANZA” and “PARTSHOP” means…indeed ,people are making very educated guesses in our comments section that “BONANZA” may have something to do with The Bonanza Brothers, the 1990 Sega shooter which saw release on the domestic Wii Virtual Console in 2007.  We have one guess in that “PARTSHOP” may refer to another Sega classic, Fantasy Zone, and perhaps Opa-Opa.  Fantasy Zone includes a feature in which your spaceship can be upgraded by touching “SHOP” balloons.

The connections make sense, enough so that we feel comfortable projecting that ChuChu Rocket!, Fantasy Zone, and The Bonanza Brothers will be represented in the final three character slots. UPDATE: TSSZ News editor Ryan Bloom has now irrefutably confirmed this information.

It is there that the steady stream of information we have from these files ends, and where we thank our anonymous news tipster for sending the materials in for us to review.  More may be to come in similar vein.  We will continue to track developments on the game as we get closer to its launch.