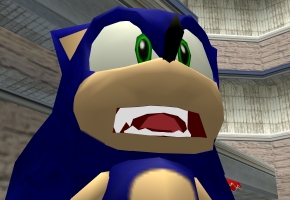 This afternoon, we’ve learned via NeoGAF and Sonic Retro that a future port of Sonic Adventure DX to the XBOX 360 appears all but cemented.  That affirms information we first told you about in August.

In the gallery below, first posted by a NeoGAFer with the screen name intheinbetween, the pictures were complemented by words of concern from that same member, who said the game suffers slowdown, even during cutscenes, and even at 30FPS.  Further, as you can tell from what we have below, don’t expect a nice HD update to the game.  With pillars in tow, Sonic Adventure DX appears to run in 4:3, and not in true HD.

Keep in mind that this is running off of a developer network, and the product is subject to change.  In the interim, here is a small smattering of proof positive that you’ll be seeing SA:DX shortly on XBOX 360.  Now, what of that “Extend Package?”  Hmmm…

Tracklist for Senoue’s “The Works” Revealed