Nightopian Jester turns up in ASR

Sometimes, it pays to be persistent. For months, now, a question has been posed by the users and staff of Nightsintodreams.com: where’s NiGHTS? For over a decade, NiGHTS has had a habit of turning up for cameos in all manner of games: the NiGHTS Pinball table in Sonic Adventure, a NiGHTS-centric quest in Phantasy Star Online Episode 2, and he has been a staple of the Sega SuperStars line of games (Eyetoy and Tennis). But, with the relative flop of NiGHTS: Journey of Dreams, doubt was cast on whether or not NiGHTS would make an appearance in Sonic & Sega All-Stars Racing. “Don’t forget NiGHTS!” they cried. 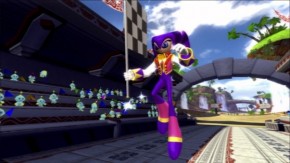 Though not a racer himself, NiGHTS has taken over white flag duties in All-Stars Racing, making him sort of like Mario Kart’s Lakitu. “He also resides over Time Trial, whenever you set a new lap record, you’ll have NiGHTS flying along with you celebrating!” says Lycett, in a post on the Nightsintodreams.com forums.

But is NiGHTS permanently barred from the driver seat? Lycett has been vocal about adding more racers through Downloadable Content (DLC) post-release. Could NiGHTS be added to the roster of drivers sometime in the future? Lycett: “That’s a question I can’t answer right now – it all depends on how well the game does.”