We go behind the wheel with Sonic

Earlier in the week, the Xbox 360 demo for Sonic & Sega All-Stars Racing went up. For the time being, that demo is exclusive to Xbox Live Gold users. We got our hands on the demo, and this is what we have to say about it.

Sumo Digital’s previous game, Sega SuperStars Tennis, was kind of a mixed bag. Personally speaking, modern-day tennis games like Virtua Tennis 3 mystify me, and the short amount of time I spent with SuperStars Tennis was no different – I never could get the timing on the hits right. Professional reviews for the game were not exactly glowing, either – many cited the complete absence of difficulty as being a sticking point. That the courts were too small, and the artificial intelligence, even on the highest difficulty setting, was too easy to fool. It was with this firmly in mind that I went in to All-Stars Racing.

So how does it fare? Well, it’s a kart racer. The demo offers up the ability to play as either Sonic or Banjo and Kazooie. Sonic is more of a typical “all-around” racer and Banjo fills in the role of the “slow to accelerate, but very fast” heavy-hitter. For racing in, we have “Lost Palace”, set in Sonic Heroes‘ Seaside Hill. If you’ve played a kart racing game before, a lot of the game should be immediately familiar to you. 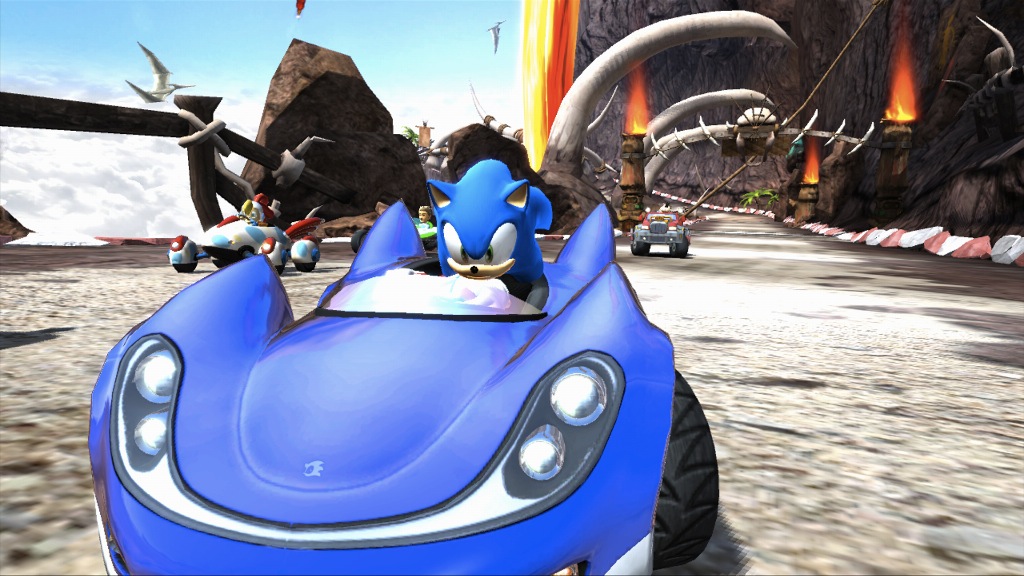 Races begin with a countdown clock, and if you lay on the accelerator at the right time, you get a short boost at green flag. Allegories for Mario Kart‘s staple repertoire of items are present, with weapons that act as red shells, banana peels, so on and so forth. Many projectile weapons can both be fired ahead of and behind you, as well.

Drifting, another kart racer staple, is present, and it’s a key and integral part of the racing experience. If you hope to move forward in the ranks, understanding and mastering the drift system is a must – a properly-timed drift in the right place can make a big difference. Lost Palace is a very twisty track, and even after multiple play-throughs, some of the turns seemed a little too sharp to manage, drifting or not. Like Superstars Tennis, every character has a specific “All-Star Move” that can turn the tide of a race in your favor very quickly. Sonic, for instance, turns in to Super Sonic, who is granted an infinite amount of speed boosts for a short period of time. 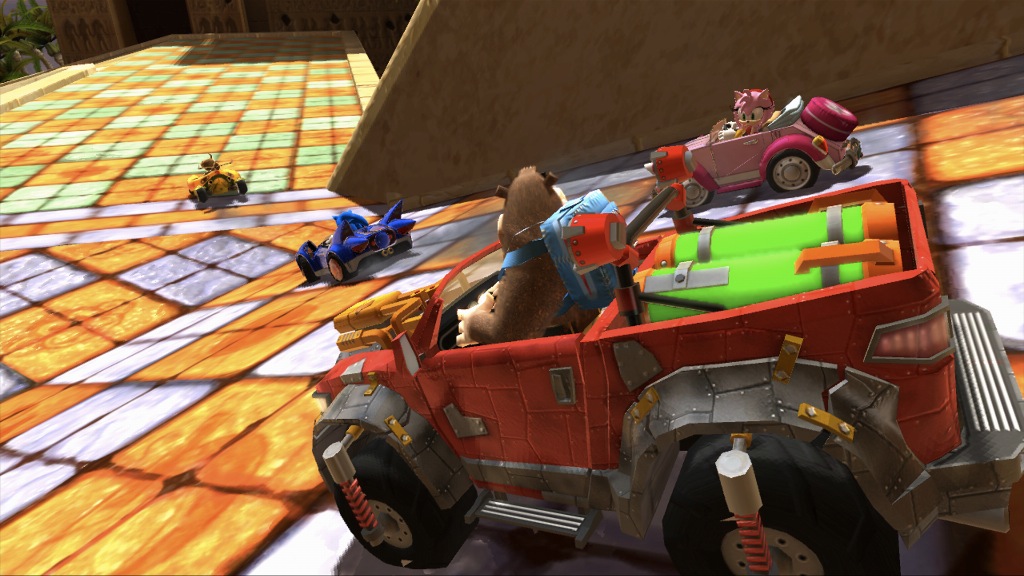 Unlike Superstars Tennis, All-Stars Racing is not an easy game. On the default difficulty setting (Advanced), most first-time drivers will have a tricky time coming in first place, and after a degree of practice, there were still plenty of last-second upsets that managed to take me down to 4th or 5th place. For those less skilled, there is also a “Beginner” difficulty, and if you’re really feeling sadistic, “Expert” waits for Kart Racing masters.

If there was one problem I could pick out of the demo that really seemed like it could rain on this game’s parade, it would be the framerate. Though initially it didn’t seem so bad, the more I played All-Stars Racing, the more I began to notice it. There are quite a few parts of the track where the framerate is well below 30 frames per second, which means a choppy experience for you. In racing games especially, a smooth, consistent framerate is key – and even though there have been comments that this might be an “old build” of the game, the framerate as it stands right now is worryingly inconsistent.

We’ll let you know if the framerate problems were fixed and how Sonic & Sega All-Stars Racing stacks up to the competition later this month in our full review.