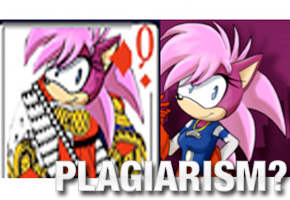 The artist known now as RianaLD has confirmed via her DeviantART journal work she created may have been used without her permission in Sonic & Sega All-Stars Racing.

“I find the situation is very funny,” she wrote on her DeviantART journal.  “I can’t say I’m thrilled, I can’t say I’m angry. This is just really funny to me.”

We reported earlier this evening that artwork of Sonia from Sonic Underground was spotted in-game by those at Spanish forum Sonic Reikai.  The artwork bears a striking resemblance to a 2007 piece of artwork RianaLD posted as Lightning-Duchess, with the headshot flipped.

“I’m really not sure how to react or if any sort of action could be taken,” she continued.  “I’ll have to look into it.”

RianaLD first learned of the prospect through multiple calls placed by her boyfriend, who is Sonic scener Tirann0.  While she is unsure how to digest the news, he has made clear his perception, making known in a YouTube video that he is “upset” and called whomever is responsible for the lift–presumably someone at Sumo Digital–an “idiot.”

So far, the DeviantART community is meeting this with mixed reactions.  Some feel RianaLD ought to feel proud to have her work featured, while others feel, after the problems with plagiarism surrounding the Sonic and the Black Knight fan art competition, that this is another stab in the back.

We will try to reach out to RianaLD for further comment.  As of the time of this article’s publication, the only other word we have on this is from Sega Europe community manager Kevin Eva, who doesn’t want the community to jump so quick to conclusions:

Much as this “Sonia cameo / some SUMO designer has snuck them in” discussion is fun and whilst you wait for the official word from S0L (I’m looking forward to this one mate) how about another theory that doesn’t involve “they’ve put in a reference to Underground OMFG” and “BOO SEGA ARE STEALING ARTZ!” eh, and lets think about whats more likely.

For no reason whatsoever we get a Sonic Underground reference.

SUMO designer mocks up some images as the characters as playing cards for review with them in game early on in development cycle, mistakingly using the wrong pink hedgehog through some google image search or something and end up using Sonia instead – and one of the instances of the work in progress card gets missed when replacing them for the final article?

That would be my theory, but lets wait for the main man himself to wake up and give us a full and proper answer which I guess will involve “Er, who is Sonia?”

Please feel free to twist anything I say to fit your own ideas about what is right as befits any comments I seemingly make nowadays.

We will continue to give you updates on the situation.