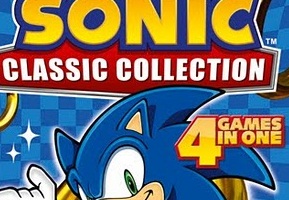 When it comes to compilation games, Sonic has had his fair share of them. Sonic Classic Collection for the Nintendo DS is the latest in a long line of collections, though the first to be featured on a Nintendo handheld. The title first appeared in the news back in November of 2009, so the development cycle was a quick process and it shows. But don’t let that scare you, it is much more improved than our last Sonic port to a Nintendo handheld, Sonic the Hedgehog Genesis (Nintendo Game Boy Advance).

The games feature mostly everything their original counterparts had, excluding a few dimes and whistles here and there. Most noticeable would be the exclusion of the unlockable sphere special stage game, so there will be no endless amounts of special stage fun for you to enjoy. The collection also does not include any multiplayer (2-player) modes from Sonic 2 and Sonic 3. 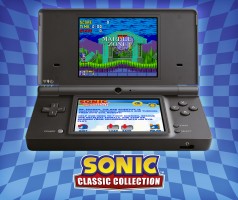 One of the best things about Sonic & Knuckles was the ability to lock it onto any of the other three Sonic games mentioned above. So far the only Sonic compilation to emulate this the best was Sonic Jam (Sega Saturn). Classic Collection features mostly everything you could do regarding this ability (minus the sphere bonus stages), from playing as Knuckles in both Sonic 2 and Sonic 3. The real drawback is not having a true lock-on feature, giving you no real way of playing as Sonic, Tails, or Knuckles through all of Sonic 3 & Knuckles in one full play through.

The four original games actual gameplay, graphics, and music are mostly all intact. The games play at a pretty good speed, but do tend to slowdown a good bit when you’re flying through a stage at Sonic’s quickest pace. You can tell the developers had a little trouble fitting the screen to the Nintendo DS ratio, the resolution looks a little bit smashed, but not enough to ruin the actual gameplay. You’ll notice the screen ratio issue when you’re at the end of a act or boss fight, the screen will tend to follow you like a camera. The other biggest screen resolution hiccup occurs in the special stages from Sonic 3 & knuckles (sphere bonus game), with the way the stages are designed, the squashed screen causes the lines in the stage to vibrate and wiggle. 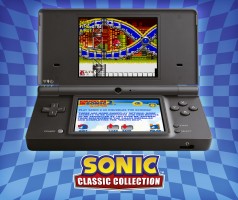 The game takes advantage of the DS touchscreen that really adds to the classic Genesis games. The touchscreen is there as a quick in-game tool, featuring a quick few paragraphs of storyline from the respective game you’re playing. The upper right D-pad featured on the touchscreen lets you scroll through control layouts and other gameplay instructions. The feature that will take you the most to get use to is the in-game pause, which is featured at the bottom right of the touchscreen. The actual DS start button only works at title start screens, but if you want to pause while playing, you’ll have to tap the touchscreen.

At the bottom of the touchscreen is a load and save feature. The save feature isn’t as exact as past ports of Sonic games (such as recent Xbox Live Arcade ports), saving the game only loads you back to the beginning of the current act you’re in, instead of sending you to the exact point of the save.

Outside of the four Genesis ports, the collection features a small gallery of Sonic artwork from Sonic the Screensaver (Sonic & Knuckles Collection). The Sonic Classic Collection is pretty bare bones and to the point. Outside of a few technical issues mentioned above, this is a pretty decent value collection with a price tag of $29.99. If you’re a Sonic fan in the need of some classic Genesis gameplay (who doesn’t still have their Sega Nomad) on the go, this is the compilation for you. For the rest of us who own a half dozen versions of Sonic 1, 2, 3, & Knuckles, you might want to stick to what you already have. 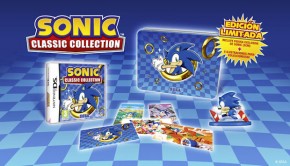 Limited Edition Review: For those of you with a little extra cash, a limited edition of Sonic Classic Collection was released in Australia. You can snag yourself a copy from a New Zealand online retailer called Mighty Ape. The game will set you back about £39 (or $68 US Currency after shipping charges).

The limited edition comes in a big tin container with a cardboard sleeve over it. Inside is a black foam pad which houses 5 collectible Sonic art cards (post cards) featuring artwork from Sonic the Screensaver, and the artwork from the Sonic Classic Collection box cover. Ending the limited edition is the small 4″ classic styled Sonic the Hedgehog figurine, who stands on a small platform. Be careful if you do decide to import this version of the game, as the figure is just barely glued to the platform.

The actual retail price of this limited edition version of Sonic Classic Collection doubles the original $29.99 price tag. You might want to consider sticking to the standard Nintendo DS version, unless you’re a big fan of rare merchandise.