Sonic Free Riders to Support Up to 12 Players, DLC 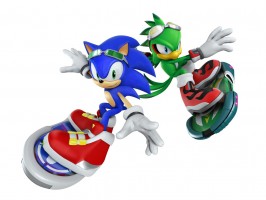 Plus, a Refresher on Developer O-Two

Through a page listing on XBOX.com, we can tell you a little bit more about the coming XBOX Kinect release of Sonic Free Riders.

For one, the game will support up to 12 player racers online via XBOX Live and up to four players locally.  Co-op and versus modes will also be a part of the multiplayer component.  “Content downloads” (or DLC) will be supported, as will online leaderboards, presumably for time attack.  You’ll also be able to taunt opponents online as voice support is included.

If you’re concerned that Sega and Sonic Team are stretching themselves thin with multiple titles, the developer reveal may alleviate your fears.  It turns out, according to the page, that O-Two are behind this latest entry in the Riders franchise.  That may not ring a bell, but it should.  They are a Japanese developer for both consoles and the web (as well as other Internet and web apps), and their website lists a lot of titles that aren’t familiar to most outside of Japan, with Teenage Muntant Ninja Turtles Arcade Attack for the Nintendo DS the notable exception.  But one item on the resumé notes that O-Two were in part behind Sonic Riders: Zero Gravity for Nintendo Wii, so there is a group familiar with the series working on SFR.  Whether O-Two has principal development responsibility is not yet known, but their own website data suggests they worked on Zero Gravity under close Sega supervision.

Poll: 58% More Excited About What Comes After Sonic Boom