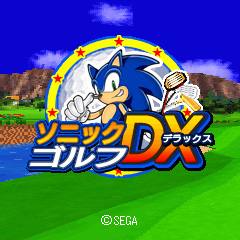 Break Out the Driver, But Only in Japan

Yesterday, Sega’s Japanese division not only announced a giveaway of some quirky Sonic merchandise.  They also launched a new Sonic title exclusively to mobile phones.

The 3D golf game, Sonic Golf DX, has players taking Sonic and friends to the golf course and vying for the lowest score on the links, according to the Sonic Channel blog.  Those scores can then be uploaded to online leaderboards.

If it sounds familiar, that’s because it is.  DX is actually the third in the Sonic Golf series.  Sega released Sonic Golf 3D with a similar concept and the online leaderboards in 2006.  It too was for mobile phones, and it too stayed within Japan. In 2002, an overhead 2D perspective was used in the original release of Sonic Golf.

Sonic Golf 3D also had DLC–it’s not clear whether DX will offer the same capability.