It’s easy to get caught up in the zeitgeist surrounding Sonic the Hedgehog 4: Episode 1. For close to a decade now, there has been a dedicated segment of the gaming community who has pounded their fists in demand for a game that plays just like the early-90’s Sega Genesis classics. By all means, Sonic the Hedgehog 4 should have been the game everybody has waited so long for. Excitement was replaced by embarrassment, however, as many discovered the game was less “sequel to Sonic 3” and had more in common with games like Sonic Advance and Sonic Rush – good games in their own right, but ultimately paling in comparison to their 16-bit forefathers. For a franchise so plagued with mediocrity, using the title of Sonic 4 on something that only vaguely references elements of the timeless Genesis classics was, to some, practically insulting. Insult on top of injury, then, when a work-in-progress version of the game was leaked to the internet, featuring some truly awful “motion controlled” segments, even on consoles that did not natively support motion control. Though vows were made to delay the game in order to right some wrongs, PR for Sonic 4 practically descended in to lunacy, with plenty of the “little white lies” that marketing teams are notorious for telling. It would almost seem that developing Sonic 4 has been more of a curse than either Sega or consumers could have ever expected, and highlights some of the behind-the-scenes management problems that lead to colossal stinkers like Sonic 2006 and Shadow the Hedgehog. But a game is more than its marketing, and to judge Sonic 4 exclusively on the incompetence of its salesmen would be unfair.

Sonic the Hedgehog 4: Episode 1 makes an early attempt to win your favor by hearkening back to the themes and concepts of its Sega Genesis ancestors. Splash Hill Zone, the first level in the game, might as well be named “New Green Hill Zone”, and the rest of the levels borrow heavily from Sonic’s past in similar ways: Casino Street cribs elements from both Casino Night (Sonic 2) and Carnival Night (Sonic 3), Lost Labyrinth calls back to Labyrinth Zone (Sonic 1) and Hydrocity (Sonic 3), and the final zone out of the four included, Mad Gear, is one giant homage to Sonic 2‘s Metropolis Zone. The game tries to mask this lack of creativity with a throwaway storyline about Dr. Eggman revising failed designs in another attempt to conquer the world. Given the proliferation of the original Genesis games on digital download services and recent compilations, one does not have to travel far to re-experience Sonic the Hedgehog 2, making Sonic 4‘s wholesale theft of old ideas feel less like “we’re bringing back old favorites you may have forgotten about” and more like “we can’t think of anything better to do”. With a few exceptions, almost every idea present in Sonic 4 was lifted from an old Sega Genesis game. 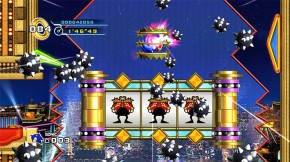 In theory, using proven concepts should make Sonic the Hedgehog 4 a game that would be difficult to screw up. Unfortunately, it’s lacking in one all-important aspect: the controls. A key, defining factor of the 16-bit Sonic games was the sense of momentum they presented. Running down slopes would help Sonic to accelerate, and running up a slope would cause Sonic to slow down a little. The steeper the slope, the more pronounced the effect, and rolling in to Sonic’s trademark “spinball” form would only increase his slope sensitivity. A well-timed spin would allow Sonic to blow through levels at far faster speeds than he could ever achieve by running on foot. When Sonic transitioned to 3D, the franchise moved away from these concepts in favor of scripted scenes and row after row of booster pads bolted to the floor of ever level. This is where Sonic 4 picks up, and though it makes a half-hearted attempt to re-implement these momentum-based controls, to a Sonic veteran, it’s endlessly disappointing that rolling in to Sonic’s ball form is mostly useless outside of specific scripted scenes where the game automatically forces you to roll, and things get aggravating about the time you reach a pinball-table-styled level like Casino Street and Sonic does not appropriately control the way a pinball should. This is to say nothing of the game’s stiff, sluggish acceleration, which can make even simple platforming puzzles awkward to complete. These are Sonic Rush controls, on a game that you can’t really play like Sonic Rush.

One would expect, then, that to truly enjoy Sonic the Hedgehog 4, you would have to forget the way that the old games originally played (which is ironic, given the fact that this game is being positioned as a direct sequel to Sonic 3), but even judging it on its own merits leads down a road of frustration. Outside of the occasional poor enemy placement (something that also plagues recent 2D games like Sonic Rush), Episode 1 is a relatively easy game – but every once in a while, that pendulum swings in the opposite direction, and you’ll find yourself stuck on a section that is several orders of magnitude harder than anything else you’ve experienced in that level so far. In particular, I managed to rack up nearly thirty 1ups in Casino Street Act 2, only to lose more than ten of those extra lives to falling down various bottomless pits in that same level – seven of which were lost in rapid succession thanks to a particularly nasty platforming challenge in the stage’s second half. The game’s final boss feels like the punchline to a bad joke – requiring a ridiculously large number of hits to defeat and an absolutely brutal attack pattern that brought me from 25 lives down to a measly 9. 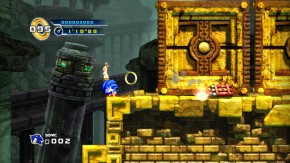 The worst part is: this is the game we are left with, even after an extended, three-month delay. That delay seems to have been primarily spent on creating new versions of the aforementioned Casino Street Act 2 and Lost Labyrinth Act 2. The latter feels like it received most of the attention, as it is, bar none, the best level in the entire game, themed around lighting torches and detonating explosives to solve platforming-based challenges. It’s a shame, then, that nothing else in Episode 1 matches its standard of quality.

Music, something even the worst Sonic games have managed to get right, falls short in Episode 1. Classic videogame music was always about the melody – a clearly definable tune that stands out, almost as if you were listening to a lyrical song minus the words. Sonic music in particular took a number of stylistic cues from 80’s and 90’s pop music artists, something that should be evident by Michael Jackson’s purported involvement in the soundtrack for Sonic 3. Sonic 4 completely bypasses that logic with forgettable songs composed using bland, faux-Genesis synthetic instrumentation. Whereas songs in previous Sonic games felt like they were trying to approximate real instruments on limited sound hardware, Sonic 4‘s music chooses its simplistic synths in a hollow bid to intentionally sound “retro”. Some songs, like the childish special stage music, cross the threshold and quickly become annoying to listen to. Sound effects are largely cribbed directly from the Sega Genesis, which is good – though it makes moments where the game opts for more realistic sound effects feel lazy and out of place. 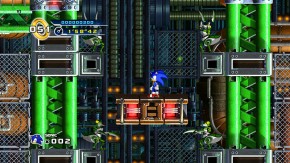 Ignoring all the Sonic fanboy-isms surrounding Episode 1, there’s at least one thing bad about Sonic 4 that I hope everyone can agree on: the price tag. Nobody will argue that $15 is a lot of money (because it isn’t), but when viewed comparatively with other digital download titles, a $15 price tag for the two hours it takes to beat Sonic the Hedgehog 4: Episode 1 is steep. The “Episode” title denotes that this is part 1 of a larger game, yet it’s more expensive than a lot of full-length digital downloads. For as much or less than the $15 price tag of Episode 1, one could be enjoying other, cheaper games like Bionic Commando: Rearmed, Shadow Complex, Castle Crashers, Braid, or Serious Sam HD, many of which provide far more content than you’re going to get out of this $15 episode. If you really want to be unfair, one could even argue that corporations have given away larger, more complete games for free, packaged with things like cereal or, oddly enough, cheese. When viewed in that light, $15 for Sonic the Hedgehog 4: Episode 1 makes for a hard pill to swallow, and speaks to Sega’s greedy attitude regarding their once-famous mascot (see also: $7 for minuscule Sonic & Sega All-Stars Racing DLC).

As the kind of long-time Sonic fan that Sonic the Hedgehog 4 is apparently made to appeal to, I find the game to be a disappointment and more evidence that few people in any position of importance seem to remember what made the Sonic games so great. In the end, Sonic 4 feels more like a mediocre celebrity impersonator: he’s got the look down, but enough of the smaller details are being ignored that the end result feels “off”. The future of this franchise is in games like Sonic Rush and Sonic Colors; games which abandon all pretenses of being “like the Genesis games” and instead focus on being new, fresh directions for the franchise. The more time Sega spends focusing on trying to recapture the magic of the 1990’s Sonic games, the more obvious it becomes that they are completely clueless as to what gamers really liked about them. Even Sonic 4 itself affirms this: the best level in the game is one which tries something dramatically different and does not tie itself down to the notion of being a retro throwback. Everything else comes off feeling like a weird amalgam of Sonic Rush and classic Sonic, and Sonic 4 does neither style of game appropriate justice. As the premiere entry intended to kick off the “epic new saga” of Sonic 4, Episode 1 may not be out-and-out awful, but it certainly is a considerable letdown.