Why you should be playing Minecraft 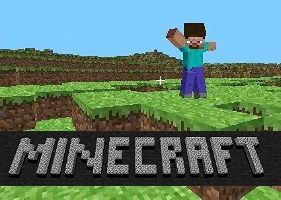 So Minecraft is pretty great.

Maybe you’ve heard of it by now. Minecraft came out of nowhere, and has more or less gone viral, spreading across gaming blogs and news sites like wildfire; making its lone developer – Markus “Notch” Persson – literally several million dollars richer. Notch has gone from being an unknown to one of the most important people in the videogame industry almost overnight. The game enjoyed its first “Free Weekend” about a month ago, though it was only free in the sense that Minecraft could not access its verification server, which was brought about because of the aforementioned surge in popularity Minecraft has witnessed these last few months. Eventually the servers that were responsible for keeping games up to date, storing player data, multiplayer information and more, buckled under the immense load and essentially died. While new servers were being purchased and installed, Notch enabled anyone to download and play a special offline version of Minecraft free of charge in the interim. I really cannot stress just how quickly this game has grown, and the best part about it is – it’s not even done yet. Minecraft is still in “Alpha”, which means that with each update to the game, tons of new features roll out with it. Previous updates have added major changes like stealth, and the newest update, slated for October 31st, will add a host of new monsters, materials and mechanics for players to experience.

But what is Minecraft? Right now, there’s not much in the way of a real “game” – but that doesn’t mean it isn’t fun. The best way to describe Minecraft is to relate back to a story that Nintendo visionary Shigeru Miyamoto once told. Miyamoto was apparently an adventurous young lad, and at one point discovered a cave near his home. He then gathered some supplies, and spent the next few weeks exploring the cave and mapping it out, by hand, on paper. Miyamoto would later cite this story and the feeling of discovery it provided as the inspiration for The Legend of Zelda. Minecraft sticks closer to Miyamoto’s original experience with the cave – it’s far more about exploration, learning about your environment, and using discovered materials to your advantage. There is no story in Minecraft, at least not yet (though Notch has apparently alluded to a forthcoming quest system), so the game is primarily about your own personal survival. You start in the middle of nowhere, unarmed and without shelter, which is bad – because once night falls in Minecraft, lots of menacing creatures come out to play, and if given the opportunity, they will try to kill you. Fortunately, you have the power of creation on your side (to say nothing of your skill at tree punching) – the ability to collect resources, to craft tools out of these resources, to build a shelter for protection and weapons for defense. Minecraft succeeds in making the player feel empowered with its extensive list of materials and robust crafting system. And maybe, just maybe, you’ll discover your own cave to explore and map out.

The problem is that in its current state, Minecraft is pretty unfriendly to the unprepared. The game comes with absolutely zero documentation and almost no directions to tell you how to play. Part of Minecraft‘s viral appeal has been the sudden proliferation of user-made instructional material. Search “Minecraft” on Youtube, and the number of videos teaching you how to play Minecraft basically outnumber everything else. Currently, the best way to play the game is to have the Minecraft Wiki open in another window, so that one can research material types, crafting recipies, and monster behavior as needed. “Figuring it out” by yourself is a quick road to getting yourself killed. In turn, however, the Minecraft Community has blossomed in to one of the most friendly, well-behaved and outright helpful game communities on the internet. The degree of collaboration that has arisen around helping others discover and play Minecraft is heartwarming to say the least. Not even an incomplete online multiplayer mode can stop people from getting together, simply to create huge cities and vast structures out of little colored cubes.

If there was one serious downside to Minecraft, it’s that when it hooks you, it hooks you deep. During the aformentioned free weekend, I played Minecraft about 5 to 6 hours a day, something I pretty much never do with a videogame. I eventually stumbled upon a vast subterranian network of caves that stretched out in every direction, full of natural waterfalls and boiling pools of lava. Much like Shigeru Miyamoto, I spent what felt like weeks slowly exploring its depths, combating giant spiders, rotting zombies, and deadly skeleton archers in pursuit of the simple knowledge of “What’s over there?”. By the time I gave up investigating the seemingly endless tunnels, I had enough materials to build a fortress fit for a king – and after what must’ve been 18 hours of gameplay, I had only begun to scratch the surface. Minecraft had me so hopelessly addicted that, once the free weekend was over, I hesitated to drop the measly $10 to purchase the game, strictly out of fear that once I own Minecraft, I will never be able to escape its grasp. Let that both stand as immense praise and a warning. Quite simply put, there is nothing else on the market right now that matches Minecraft‘s depth and its scope, and the game is still growing at a rapid pace.