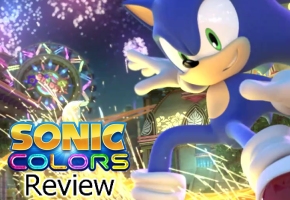 These Colors feel so right.

Sonic Rush changed everything about the Sonic series. The stylish music, hyperactive presentation, and focus on all-out speed took root and not only birthed a sequel (one Sonic Rush Adventure) but also heavily influenced the Sonic franchise as a whole, as clearly evident in 2008’s Sonic Unleashed. In a similar vein, Sonic Colors on the Nintendo Wii continues many of the ideas put forth in Unleashed with some key twists to the formula: namely the ability to imbue Sonic with temporary new abilities by bonding with “Wisp” aliens. This feeds back in to the game we’re here to talk about today: Sonic Colors for the Nintendo DS. Quite clearly running on the same technology that powered the Sonic Rush games, it makes drastic changes to the tried-and-true gameplay formula in order to bring it closer in line with its console big brother. Is this the next evolution of Sonic in 2D, or too much of an alteration to a popular formula?

If you’re starting out with memories of the Sonic Rush games fresh in mind, Sonic Colors will be immediately disorienting. The game is built upon on the Sonic Rush engine, and though the basics of control remain somewhat familiar, nearly every aspect of how the player interacts with the world has changed. All of the leg stomps, slide kicks and wall jumps from the Wii version of Colors are present, but the biggest change from Sonic Rush is how the player charges up the the boost meter. In the Rush series, boosting not only sent Sonic tearing through levels at untold speeds, but made the player nearly invincible in the process. But in order to use the boost, you were first required to charge it up – done by executing long strings of acrobatic flips and spins via the game’s simplistic trick system. Sonic Colors retains the same basic concept of boosting and boost energy, but makes the player work a bit harder to charge it up. Boost energy is only acquired by picking up Wisp capsules that refill the meter or from destroying enemies. The net effect is that while in Sonic Rush you usually have enough energy to boost everywhere at maximum speed, Colors asks you to take things a little more slowly and conserve your energy – at least, until you figure out where all of the boost refills are located, and from there you can resume running around like a maniac to your heart’s content. This results in a far more gentle pace to ease new players in to the ultra-fast world of recent Sonic games, as the more experienced the player is, the more they discover ways to maintain high speeds for longer periods of time.

Speed is all well and good, but can only take you so far. What really cemented the Sega Genesis Sonic games as classics were the bits of slower, more thoughtful puzzle solving and platforming sandwiched between all of the blazing speed and loop-de-loops. Though the old Sonic games were masters of this ebb and flow, games like Sonic Rush focus more on aggressively pushing the player forward without ever stopping. Worse still, when other recent Sonic games asked the player to slow down and focus on something besides running really fast, it was usually accomplished by introducing a new playable character who exclusively specialized in that slower gameplay style, which often tilted the game’s moment-to-moment balance too far in an given direction. Colors sidesteps the dead weight by introducing a gaggle of aliens called Wisps. By touching a Wisp, Sonic is granted a time-limited new ability like transforming into a beam of light that bounces off reflective surfaces or becoming a drill that can burrow through soft dirt. This opens up a vast new world of possibilities, and the DS Colors features huge, incredibly intricate level design that hearken back to the time spent exploring Sonic the Hedgehog 3‘s monstrous environments.

If that wasn’t enough, there’s also the game’s fully-featured multiplayer mode, playable over local wireless or the Nintendo Wi-Fi Connection. In a first for the series, you can even experience the game’s multiplayer mode by yourself, as Colors features the option to race against an A.I.-controlled opponent. It’s usually not very difficult to beat the computer to the finish line, but at the very least, Sonic Colors multiplayer stages are wholly exclusive to that mode – effectively doubling the amount of content in the game. It’s not a perfect implementation, of course, as opponent racers appear as nondescript orbs of light (which really hurts the notion that you’re actually facing off against another player), but it’s the thought that counts, and having multiplayer in some form – especially online-enabled multiplayer – is better than not having it at all.

Unfortunately, the scope of Sonic Colors comes at a price: With four platforms worth of Sonic the Hedgehog 4 and two completely separate editions of Sonic Colors launching roughly a month apart, one gets the impression that the developers behind these titles were beginning to stretch their attention a little too thinly, as evidenced by what feel like cut corners in Sonic Colors DS. In general, the game suffers from a basic lack of polish, which occasionally manifests itself in unclear level design. There are times where I’ve been killed simply because I hit a grind rail at the wrong angle, even though it was the game’s fault that I was launched that way in the first place. Some of Sonic’s Wisp abilities could use better controls, too – especially the DS exclusive Wisps like Burst and Void, which are remarkably difficult to steer. But the lack of polish is most visible in the game’s graphical presentation, which hardly does the beautiful vistas of the Wii version justice. The portable Sonics never really replicated the bold, surrealistic art direction of their Genesis forefathers, but Colors on the DS brings to mind the kind of graphics you’d see in an old, poorly-made mobile phone game. I even had the game actually crash on me a couple of times, usually after dying and returning to my last checkpoint – something that has never, ever happened before with either of the preceding Sonic Rush games. There are a handful of other minor issues – like the archaic inclusion of a separate Time Trial mode (the game should keep track of fastest times through normal play, much like the Wii version), or the barebones leaderboard system – that ultimately make the game feel like it didn’t get the development time it deserved.

Regardless, Sonic Colors on the Nintendo DS is a fun game, and its problems rarely warrant anything more than the occasional raised eyebrow. The biggest dilemma I faced while playing Colors was how to rank it versus the Sonic Rush games. While I’m still not entirely sure the DS Sonic Colors has quenched my thirst for a real Sonic Rush 3, it showcases a depth in its mechanics that Rush could never muster. It may have a few rough edges, but it leaves me hopeful for the future of this franchise in the way no other Sonic game has. Even if you already own the Wii version, you owe it to yourself to check out the Nintendo DS version of Sonic Colors this holiday season.