Inside Ken Penders’s Alleged Work for Hire Agreements with Archie

They Exist, But Remain in Dispute

TSSZ News has obtained through sources copies of two work for hire agreements Archie Comics claims Ken Penders signed during his tenure with the Sonic series.

A five page “Revised Newsstand Comic Independent Contractor’s Agreement” and a three page “Licensed Comic Books Independent Contractor’s Agreement” are the heart of a current legal battle between Penders and Archie.  The comic publisher submitted the documents when it filed a complaint against Penders in November, but it had never been available electronically for public review.  Because the documents contain personally revealing information, such as address information that is pixelated in the above image, TSSZ News has elected not to publish the documents in full.

Both work for hire agreements carry Penders’s alleged signature, dated December 12th, 1996–more than three years after he started work on the series.  They also carry the alleged signature of Archie’s then vice president of finance Edward Spallone, dated November 25th, 1996.  In theory, that makes the long passage of time between Penders’s first contributions and the execution of said agreement important, were it not for Archie including the following paragraph Newsstand specific ICA:

18.  Contractor represents that all of his/her contributions to any Properties or Works have been commissioned by Archie and prepared at the request and expense of Archie and that all past, pending and future contributions of Contractor to the Works and Properties are and shall be Works for Hire owned by and for the benefit of Archie.  Contractor and Archie acknowledge that they have entered into previous oral and written Work for Hire agreements, including the Newsstand Comic Independent Contractor’s Agreement that Archie and Contractor executed in __________ (fill in year if applicable; leave blank if inapplicable), and that Contractor’s past and pending Contributions to the Properties and/or the Works, if any, were created pursuant to such earlier agreements and are Works for Hire.

You may have noticed a blank space in the above paragraph.  The document has that space intentionally left blank, as are other potentially key spaces in both agreements.  Whether those may become points of contention in the case is to be determined.

Still, to be sure, the contract states in paragraph 19 that any other works a contractor makes to a work or property–in this case, the Sonic series–that are not directly subject to the agreement are to have all rights assigned to Archie.

“Contractor will and hereby does assign to Archie any right, title and interest that he/she has or may obtain therein, including all copyrights, patents, trademarks and other proprietary rights,” the paragraph reads.

The Newsstand Comic ICA also states the agreement will be governed by the laws of New York State, where Archie is headquartered.  That has become a new point of contention in the case, as counsel for Penders has moved to relocate the case to California, if not have the case thrown out completely.

The second agreement Penders allegedly signed, the Licensed Comic Books Independent Contractor’s Agreement, reaffirms jurisdiction.  Though meant principally for the Sonic series and offshoots, it also does not specify in writing what “Licensed Comics” Penders was writing for, as the contract specifies.  The agreement also does not specify Sega or anyone else as the “Licensor”–there are merely blank spaces left. 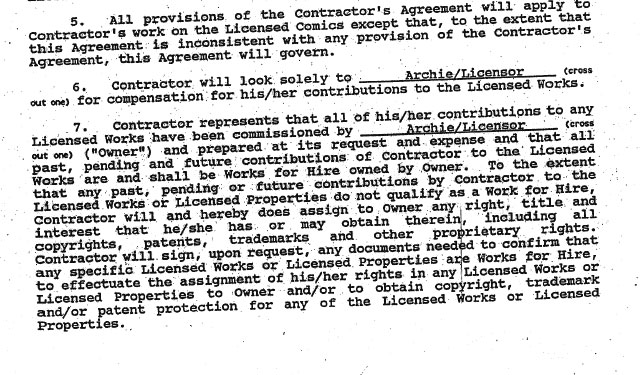 Where it gets even more complicated is where Archie was to specify the owner of the licensed work, who commissioned it, and who Penders was to look at for compensation.  As seen in the image above, one party–presumably Archie–was to designate whether they or the “Licensor”, Sega in this case, were the “Owner” of Penders’s work.  The documents entered into evidence show that never happened.  That’s important because the contract states “that all past, present, and future contributions” are considered Works for Hire by the owner, but that owner is never clearly outlined.

In the suit, it has allegedly been conceded the documents are copies and not originals, and there remains a question as to whether Archie Comics has the original documents.  Penders disputes the authenticity of those documents and has throughout the case for that and other reasons, alleging the style and scope of the agreements were unlike anything he had seen in his prior experience within the comic industry.

TSSZ News has also learned neither Archie Comics nor Sega responded to the US Copyright Office’s request for any challenge of the claims Penders sought when he filed for copyright protection, and that there was a 30 day window to do so.  This paved the way for his works to be registered beginning in June of 2010.

Research and evidence continues to be collected in the case, with the next conferences scheduled for June.  We will continue to bring you more developments as they enter into the public record.