Coming from the department of “this looks legitimate to me but we’ll post it as a rumor to stay on the side of caution” is a news tip from GhostSeven, who has provided us with box art scans from a couple of upcoming Sega games: 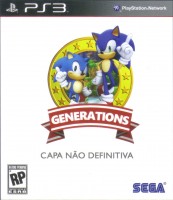 Both images call back to an October story we posted in conjunction with Sonic Paradise regarding Izaskun Urretabizkaia’s comments on a game then-titled “Sonic Anniversary” and a new Mario & Sonic game focused on the 2012 London Summer Olympics. Both box art shots apparently emerged from a Brazilian gaming website called gameLib, though the specific details of how and where they came from are not readily apparent as they aren’t attached to any visible news story.

Not to get all “I have seen quite a few shops in my time and I can tell by the pixels” on you, but by my eyes, both images look pretty legitimate, and bear no immediately obvious hallmarks of being tampered with. “CAPA NÃO DEFINITIVA” is Portuguese, and translates to “COVER NOT FINAL”.

Outside of confirming the new Mario & Sonic game set for release this year, this connects the dots from Sega’s untitled Facebook teaser to the name “Sonic Generations“, a connection many had assumed but was never set in stone.

TRISTAN UPDATE: For those doubting the authenticity of the story, the Brazil based Power Sonic actually followed up with our tipster, and they explain the box art surfaced via Brazilian based distributor MC Games, who first received the creative.  MC Games does distribute some Sega games in Brazil, and according to the Power Sonic report, it appears someone within the company gave it to GameLib.  The box art was intended to promote pre-release activity.

In their coverage, CVG reached out to Sega for comment, to which a firm “no comment” was given.

Depending on how this goes, this may be subject to our Sensitivity Rule.

The Ten: Revisiting the Simplenet Crisis