Of course Halo, but what else was up Microsoft’s sleeve?

Kinect has been kind of a weird thing. Since it’s formal unveiling at last year’s E3, the body-sensing motion device has seen numerous ups and downs, with plentiful technical hiccups and struggling software support. Microsoft, for their part, refuses to give up, focusing a significant portion of their press conference around the next wave of Kinect software. 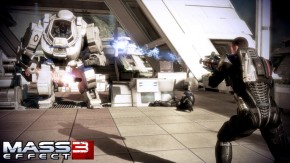 Get chatty with Mass Effect 3 and Kinect

Microsoft’s latest push to get Kinects in to homes is their new tagline for the device: “Better with Kinect”. A slew of games were revealed that, while not full-body experiences, utilize select features of the Kinect hardware in ways that augment traditional gameplay. The first being Bioware’s upcoming Mass Effect 3, which allows the player to communicate with their team through spoken voice to both issue tactical commands and speak directly with characters during dialog sequences. Other “Better with Kinect” games include Forza Motorsport 4, which uses the device to track head movement among other things, and Tom Clancy’s Ghost Recon Future Soldier. Future Soldier perhaps makes the most odd use of Kinect: voice commands select your weapon loadout, with abstract hand gestures being used for shooting and aiming. It remains to be seen if this will prove to be anything more than an odd novelty. Microsoft is doing their part to ease pressure off of Kinect developers with the reveal of Kinect Fun Lab, a tech-demo hub for studios to publish what essentially amount to motion controlled toys designed to play with Kinect’s boundaries and limitations without worrying about having to attach them to a multi-million dollar game.

Venturing beyond that, Microsoft also showed a slew of Kinect-exclusive software, including live demos of Kinect Star Wars, and Fable: The Journey, both appearing to be some form of on-rails shooting gallery, similar to classic games like House of the Dead. Also on tap was a teaser trailer for Crytek’s Kinect roman melee brawler “Ryse“, which given the nature of the teaser may also be another gesture-based rail game like Fable and Star Wars. And then there’s Kinect Disneyland Adventures and Sesame Street: Once Upon a Monster, both fairly low impact games that seem to be more about younger gamers interacting with favorite franchises more than complex gameplay or puzzle solving. And rounding Kinect game announcements: Indie game time-sink Minecraft will be coming to consoles exclusively on Xbox via Kinect.

And if you still haven’t had your fill of Kinect, Microsoft went the extra step and unveiled a brand new Kinect-exclusive dashboard for the Xbox, finally providing feature-parity with the controller-based Xbox dashboard. Using gestures and voice, you will be able to access all your music, and videos, and debuting with this new dashboard will be a slew of new content partners, including the ability to finally watch Youtube content through your Xbox 360. With so much content in so many different locations, Microsoft also unveiled the ability to search everything through Bing on your Xbox 360 – simply feed it a search term, and it will return search results for Netflix, Zune Marketplace, Youtube, game demos – anything and everything available for that keyword.

It wasn’t all Kinect focused, however; nestled between various bouts of flailing and occasional dancing were looks at the completely over-the-top military shooter Modern Warfare 3, the equally intense sci-fi shooter Gears of War 3, and looks both towards the past (the HD update Halo: Combat Evolved Anniversary) and the future (a teaser for Halo 4). 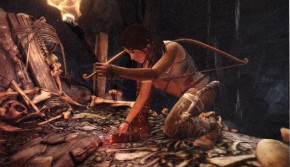 This is grim stuff, Ms. Croft

But perhaps most interesting (if only for the fact it wasn’t another shooter) was the live demo for Eidos and Square-Enix’s upcoming Tomb Raider reboot. Rather than try and compete with Uncharted for the title of “game most like Indiana Jones that does not actually star Harrison Ford”, this new take on Tomb Raider goes in a completely new direction. On paper, it doesn’t sound too different to the old Tomb Raider games: Lara Croft is a would-be adventurer seeking excitement, when she ends up the only surviving member of a shipwreck that strands her on a mysterious island. It is up to Lara to solve the island’s many mysteries and live to tell the tale. Where the game differs from a typical Tomb Raider romp is in its tone – imagine Castaway with Tom Hanks blended with torture-centric horror movie Hostel and a pinch of LOST‘s layered mysteries and you have a vague jumping off point. It’s a surprisingly grim, gritty take on raiding tombs, perhaps featuring more in common with survival horror than anything else. The demo’s claustrophobic spaces and tense mystery definitely stood out in contrast to the rest of the games shown at Microsoft’s conference. As memories of Microsoft’s presentation fade, I find myself eager to know more about Tomb Raider more than anything else.

PSO v2 Only in Japan?

No PS Vita in Domestic Markets Until 2012