Evidence mounts on the existence of a PC version

DrKirby of NeoGAF has offered this tantalizing image: 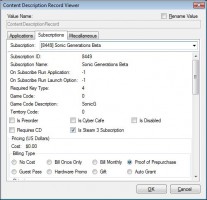 If you haven’t already deduced for yourself, this is a product listing on Valve’s leading PC download service Steam for a “Sonic Generations Beta”. Specifically, it’s from Steam’s “ClientRegistry.blob” file, which contains basic product data for everything currently in Steam’s database, both on games the player already owns, and on games they have yet to purchase (and it should go without saying that attempting to edit that file is probably not a good idea). This only adds credence that Sonic Generations is planned for a PC release.

Running through the displayed info, not much can be discerned about this version of Sonic Generations. Outside of the fact it’s obviously labeled a “Beta”, the other checkboxes don’t tell us much – thumbing through nearly 9,000 Steam product entries, the “Is Steam 3 Subscription” and “Proof of Prepurchase” checkboxes generally seem to be shared with unlisted pre-release review copies of games. What this means is that unless you have a special download code, you aren’t allowed access – leading to the obvious conclusion that this is intended either for the press or Sega’s own internal development teams.

It’s important to note, then, that this still does not guarantee Sonic Generations will actually release on the personal computer; it is entirely possible that some other issue is preventing Sega from announcing that version of the game at this time, though what that issue may be is anybody’s guess – but rest assured, if one does get announced, we’ll let you guys know.

PSO Game Saves on Your DC Only