Far From a Complete Trinity

We have some new details concerning the 20th anniversary edition of the Sonic Heroes soundtrack set for release later this month.

As with the previous soundtracks, this is not a complete OST.  Just 30 of the OST’s 50 tracks will be included on the disc.  Many of the event themes were cut, as were some of the special tracks from Complete Trinity, including the original cut of Casino Park, and the remix of Bingo Highway.

Take a look at the tracklisting below, followed by box art.  If it’s of interest, you can order the commemorative album through our merchant partners at CDJapan, or your preferred retailer.  Thanks to Woun of Russia’s Sonic Scene for tipping us.  If you have news to share, be sure to share it with us by clicking Send News Tips at the top of every page. 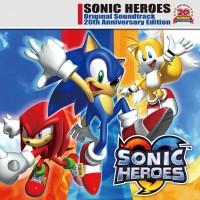