There was a Charmy Maze 1?

And SAGE rolls on! After so many years of writing articles like this, I’m actually starting to run out of ways to write intros for these. 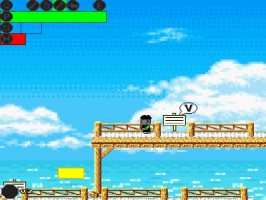 Cheddly and Clouds Crazy Adventure 2
Obviously some kind of riff on Sonic Heroes (minus the Sonic part), Cheddly and Clouds Crazy Adventure 2 has you switching between multiple characters to overcome specific obstacles tailored to that character’s abilities. Characters who shoot fireballs can light fuses on bombs, mages can cast spells (typed in using the keyboard), and other characters can build things, Lego-Star-Wars-style. Kudos must be awarded for not just ripping off the Sonic archetypes for this game. The ideas at play here are most definitely sound, it’s just their execution that could use a lot more work. For example, the game will instruct you in a tutorial to “Switch to your Mage”, despite never actually communicating who the mage was. On top of that, the HUD is unintelligible and the controls are less than ideal. If you can get past those things, maybe you’ll have some fun with it. 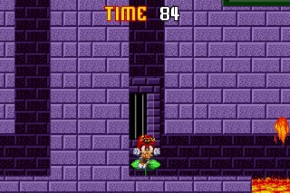 "Maybe we could have tried a little harder!"

Charmy Maze 2
Coming from the creator of Amy Dress Up is “Chamry” Maze 2! Perhaps it’s just my weird sense of humor, but Charmy Bee starring in what essentially amounts to a Sonic-ized version of “Irritating Stick” is incredibly hilarious to me on a conceptual level. For those of you who don’t have any idea what I’m talking about, the basic gist of Charmy Maze 2 is that you have to move Charmy Bee through an obstacle course without touching any walls. Touch a wall, you get sent back to your last checkpoint (after Charmy Bee encourages you to try harder). Get to the end, and the controls switch to a more traditional platformer as you fight an enemy. Take damage here, and 5 seconds are subtracted from the amount of time you have left to beat the boss. Beat the boss, move on to the next level, and repeat. As much as I hate to admit it, but there’s almost a fun game in here. The entire concept of the game is ridiculous and kind of annoying, but in a way that is… endearing, if that makes any sense. The real problem in all of this is the boss battles – precluded by typo-ridden dialog with faint attempts at “humor”, I found them a chore to work through, especially given all of the bosses I faced had the exact same attack pattern and required more than 20+ hits to defeat. Definitely not the deepest game, Charmy Maze 2 is probably still worth giving a look – even ironically. 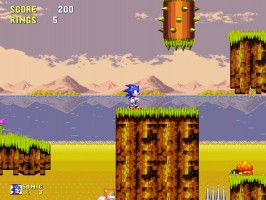 Sonic and Friends 2
Sonic and Friends 2 does a lot of things right. Rather than use Multimedia Fusion, GameMaker, or anything else, it appears to be hand-coded in with the Allegro C++ libraries. Because of this, the game runs extremely well, even on less powerful hardware – and utilizes this to provide some beautiful, high-resolution sprites. I cannot imagine the amount of time that went in to redrawing Sonic, Tails and Knuckles at twice their normal resolution, but the result looks very, very nice. The problem is that for all of its nice technology and pretty sprites, Sonic and Friends 2 just isn’t very fun to play. The major failing is that levels are way too big, way too empty, and frequently commit a number of level design sins, with downright obnoxious enemy placement and a tendency to launch the player unawares directly in to them. There’s so much potential in S&F2 that it actually kind of hurts to see levels this poorly designed. I really hope these problems can be ironed out, because I’d really like to see this game succeed. 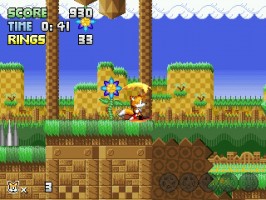 Project Spikepig
Project Spikepig is yet another in a long line of one-level demos featuring a Green Zone – which would be a problem if not for the fact that Project Spikepig is a Sonic fangame that really seems to have an eye for genuinely intelligent level design. There really seems to be an effort at subtly teaching the player how to use its level gimmicks – something many other fangames fail to correctly execute on. If I had to find a problem with Project Spikepig, it’s that it feels like I’ve been playing this same level quite a bit. Though I don’t remember it making an appearance at last year’s SAGE (it’s all a blur, really), it definitely feels like I’ve been playing and re-playing Tropical Trance Zone for at least a year. One can obviously see the amount of work that has gone in to Project Spikepig, given that a gallery of old screenshots showing previous versions of Tropical Trance have been included (dating all the way back to April), and it’s nice to be a perfectionist and all, but I’d like to see a new stage from this game now, because what’s here is really good and I’d like to play more of it. 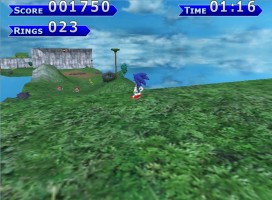 Making fun of the name is too easy.

Sonic Small World
Small World is yet another entry in a category that’s been slowly gaining momentum: the 3D Sonic fangame. It’s clearly baby steps here, though, as while Small World‘s physics system seems to be fairly sound, the level itself is incredibly… basic, I guess you could say. A lot of the most important core ideas seem to be in place, though. This certainly could be on the right track to something great, with enough polish and a lot more content. Unfortunately, as it stands right now, Small World is incredibly bare bones. 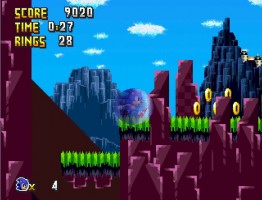 Sonic: Before the Sequel
Before the Sequel is apparently set between Sonic 1 and Sonic 2 and, in part, tells the story of Sonic and Tails meeting for the first time and Sonic witnessing the construction of The Death Egg, pre-launch. Sure, it probably contradicts Sonic “canon”, but who really cares about Sonic canon anyway? (Sonic Team sure doesn’t.) Before the Sequel sets itself apart with unique art direction, animated cutscenes, and a delightful sense of verticality to level design – the two acts provided in the demo aren’t shy at making you climb up cliffs and run down huge slopes to get where it wants you to go, something I enjoyed immensely. The dim spot in all of this is the provided boss; done up like one of Sonic Advance 2‘s “rolling bosses”, you must chase down Dr. Eggman’s jet and do enough damage to it, while constantly under fire from its guns. The controls here kind of fall apart, as it’s really easy to mess up a jump, and the boss only gets harder the more you damage it, leading to a pretty significant sense of frustration. Still, the levels themselves are what matters, and Before the Sequel looks like it could be a really awesome game once it gets finished. 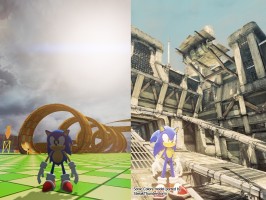 SonicGDK
And bringing us home is SonicGDK Preview Release 5, which, though technically not a “fangame” itself, is still a remarkably important piece of software. If you aren’t aware (despite our previous and ongoing coverage), SonicGDK is a framework for developing your own 3D Sonic games, using the power of Unreal Engine 3, the same engine that powers many of today’s games, such as Mass Effect, Gears of War, Alice: Madness Returns, Mortal Kombat 9, and Batman: Arkham Asylum. It finally went open source a couple months ago, allowing anybody to modify any part of the engine, add new features, and create levels for it. For anybody considering creating a 3D Sonic fangame, SonicGDK should be the first place they start, as many of the most difficult elements are already completed and very polished (and there’s tons of Unreal Development Kit tutorials out there for those that want to learn). For those of you who don’t know how to use the free-to-download Unreal Development Kit, there’s a pre-built EXE and a test stage to play around in. SonicGDK is still in development and receives frequent updates, so giving its coder (Xaklse) feedback on controls, physics, and more is still vital, so make sure you check it out if any of this sounds interesting to you – assuming you have powerful enough PC hardware to run it.

And that wraps up today’s round of SAGE 2011 reviews! Unfortunately, I feel like I’m coming down with a pretty nasty cold, so if you’ll excuse me, I’m going to go pass out for the remainder of the night.